Many Lange watches set me in actual pain, I need them so much. To make this issue sound more severe than it really is, I will call it Futile Unattainable Watch Acquisition Syndrome (FUWAS, for short). If someone has copyrighted that already, have his lawyer contact mine. Exactly because it’s a heavy weight horological muscle-flexer of a watch, a watch that’s so overdone, its doping has enabled but a couple of little segments in the Lange DNA to survive such abusive treatment. In fact, we have seen the combination of a round instance, perpetual calendar and moon period in sub-dials, and a chronograph many times earlier. Many, many times, because that’s how really spoiled we are. The Tourbograph even shows some skin (lovely skin, in fact) at 6 o’clock to allow you to know not just using its own font choice and ever-so-slightly unique lugs that it is a Lange.I fully understand the worth and the amazing goodness at the bespoke, not-copied-from-anyone-else engineering that’s under the hood of this Tourbograph Perpetual, but we are not speaking about an uncased movement here, however a comprehensive watch. On that note, anyone who doesn’t tingle in the sight of the motion should seek medical care, quick! To take a more positive approach to what unquestionably is a watchmaking masterpiece, then we must look at the myriads of nice details the Tourbograph offers.

How does one recognize a watch from A. Lange & Söhne ? By its classic aesthetic mingling rigorous discipline with pared-down elegance ? By its combinations of horological complications whose interpretation systematically reaches the heights of excellence ? Doubtless all this at once. Founded in 1845 in Dresden and relaunched in the 1990s in Glashütte, the Saxonybased manufacturer cultivates the fundamental tenets of mechanical sophistication and formal refinement with a passion for tradition combined with a distinct taste for technical innovation. Witness the 59 calibers (and counting) masterfully developed in the workshops of the Manufacture since 1994 to power timepieces that are as precious as they are accurate. 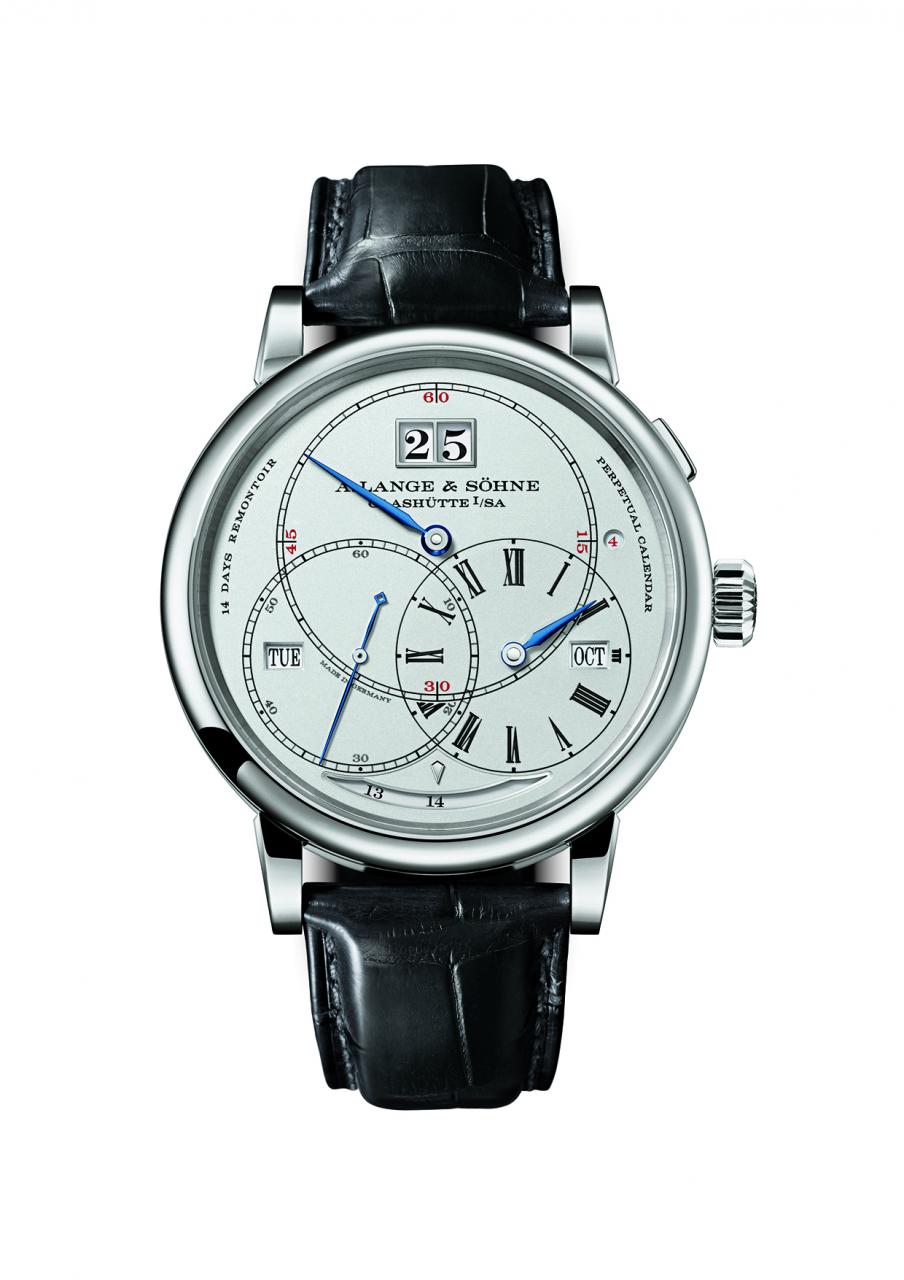 This precision ideal, combined with the spirit of invention and the quest for aesthetic perfection, is embodied in the Richard Lange Perpetual Calendar “Terraluna” model. Operating at the very pinnacle of the watchmaking art, A. Lange & Söhne takes up the challenge of combining an orbital moon-phase display, a perpetual calendar with Lange oversized date, a 14-day power reserve and a constant-force escapement. An impressive list that the Saxony-based watchmakers have managed to stage without compromising legibility. To achieve this, the Richard Lange Perpetual Calendar “Terraluna” positions its indications on both sides of the 45.5mm case in pink or white gold. On the dial side, the model features a regulator-type design, typical of high-precision scientific watches. Beneath the distinctive Lange big date, two smaller apertures show the days of the week and months. This layout enables calendar displays to be read off at a glance, without requiring any correction before 2100. The leap-year display appears in a small circular aperture located on the right-hand side, next to the 15 on the minutes circle. On the movement side, this model is equipped with an innovative and functional orbital moon-phase display, which also shows the position of the Moon in relation to the Earth and the Sun – a fascinating technical innovation. The display is composed of three disks. On the star-studded sky disk, the Moon, which can be viewed through a round opening, turns clock-wise around the Earth. Its synodic revolution reproduces the actual moon cycle so closely that the indicator will require a one-day correction in… 1,058 years! This feat is complemented by a device ensuring constant force for a full two weeks, supplied by twin barrels, resulting in optimal precision from start to finish of the power reserve. 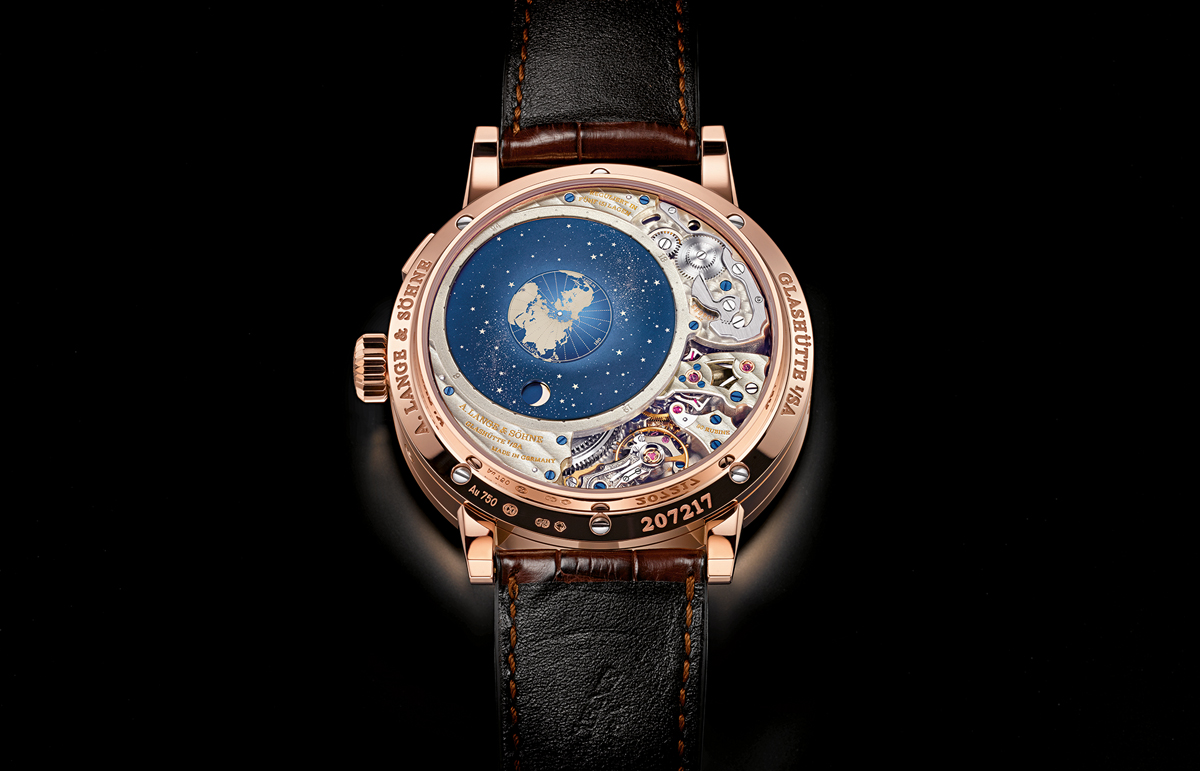 The quest for precision cherished by the Saxon Maison also governed the creation of the Tourbograph Perpetual “Pour le Mérite” model, issued in a platinum 50-piece edition. This fifth masterpiece in the “Pour le Mérite” series by A. Lange & Söhne associates fusee and chain transmission with a tourbillon, a split-seconds chronograph and a perpetual calendar. Incorporating a perpetual calendar proved a sizeable challenge for the in-house movement construction specialists. They had to orchestrated the complex set of gear wheels without generating mechanical conflicts or any avoidable energy losses. The watchmakers accordingly developed a new proprietary caliber whose accuracy is guaranteed until the year 2100. A single correction will be required on the last day of February of this century year, after which the calendar will be set for another whole century ! Combining a split-seconds chronograph with this complication was one of the main difficulties, given that the operation of both functions calls for optimal energy management. Not to mention the addition of a tourbillon perfectly synchronized with the fusee and chain transmission device and thereby compensating for the effects of gravity and the dwindling energy of the mainspring. 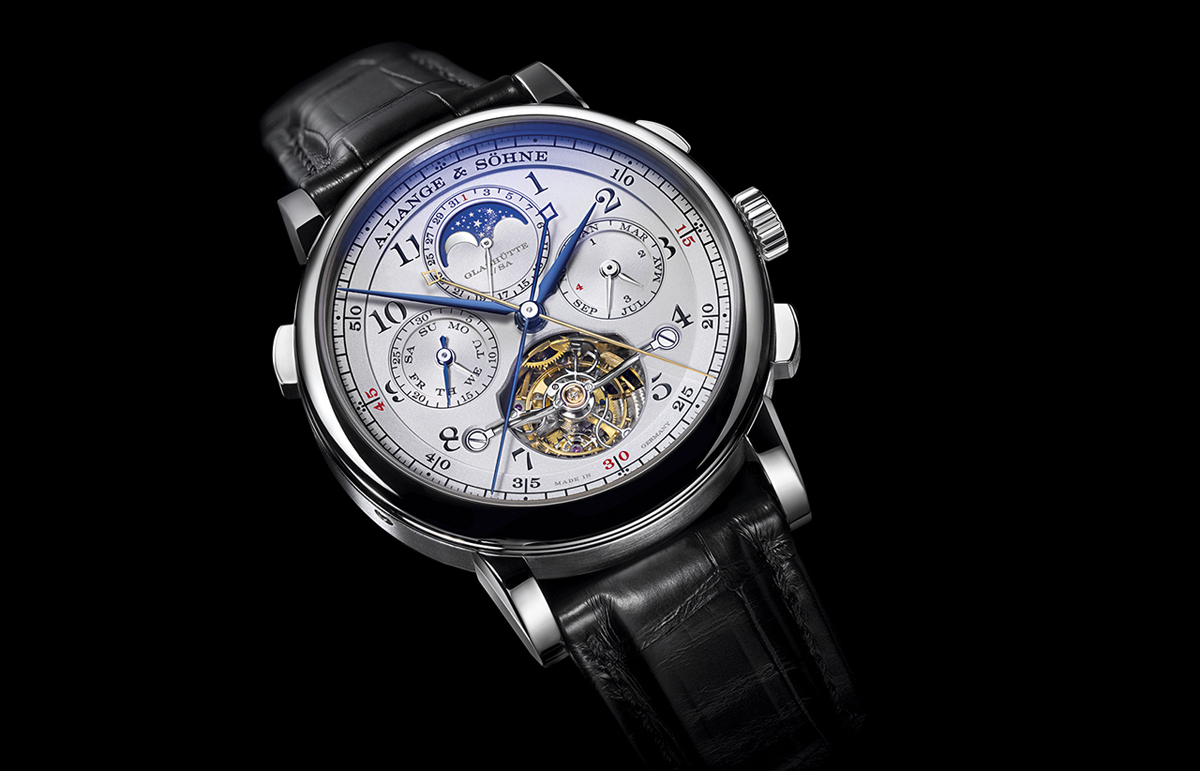 Finally, precision is also the core principle of the new Lange 1 Moon Phase, equipped with a brand-new movement. This fascinating, romantic and elegant astronomical complication, one of the most sought-after among watchmaking connoisseurs, reproduces the synodical lunar cycle so accurately that the discrepancy with the actual position counts to just one day in 122.6 years. This performance is staged in a realistic decor serving as a day/night indicator. The various moments of the day are depicted on the disk by various shades of blue, produced by interference effects : during the daytime, one perceives a light sky with no heavenly bodies ; whereas at night-time, laser-cut stars stand out against the dark sky. This subtle interpretation of the mechanical excellence cultivated by A. Lange & Söhne is available in three versions : white gold with a black dial, pink gold with silver-toned dial, or platinum with a rhodium-plated dial. 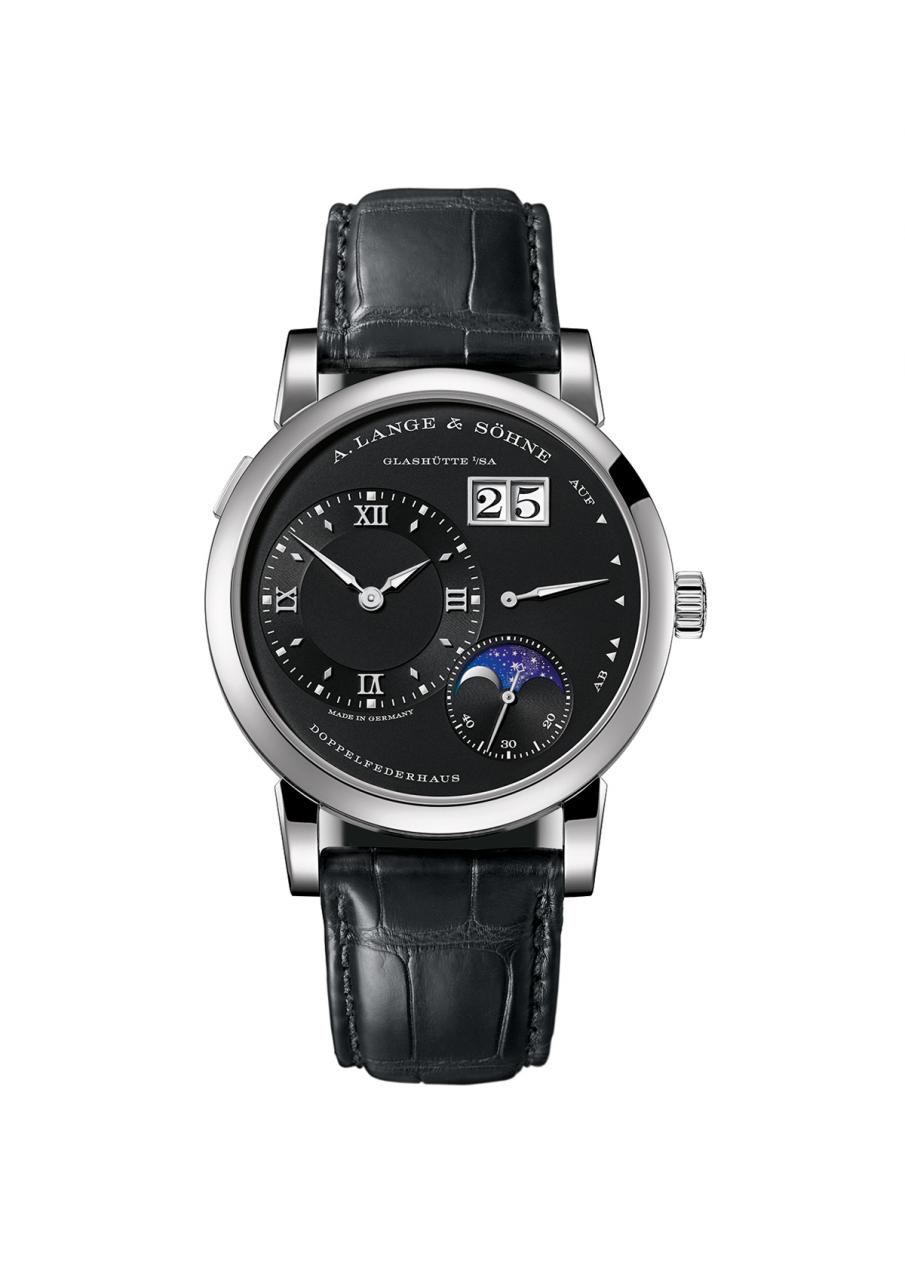 The classical, timeless and refined timepieces created by A. Lange & Söhne stem from a quest for perfection intended to combine excellence with daily necessities. Among the models combining functionality, precision and useful complications in an exemplary manner, the 1815 Annual Calendar establishes itself as a paragon of these qualities. The second timepiece by A. Lange & Söhne to be equipped with calendar functions, this new model features a mechanical manual-winding movement and an analog date display – one of the most useful indications, complemented in this instance by the precision moon-phase display calculated to run 122.6 years with no need for correction, as well as the day of the week and month. In the same collection, performance and elegance are admirably embodied in the new 1815 Chronograph, which offers a new variation with a white gold case and black dial. Since 2004, this sporty model epitomizes the perfect match between classic design and technical innovation. Alongside the small seconds subdial and 30-minute counter, this timepiece features the original and useful pulsometer function. A perfect means of measuring the inevitable pulse rate acceleration at the sight of the world’s most spectacular parading at the Concorso d’Eleganza Villa d’Este, sponsored since 2012 by A. Lange & Söhne. Unless the cause of such palpitations were in fascat the Lange 1 Time Zone “Como Edition”, a special edition exclusively created for the winner of the “Best of Show” category. 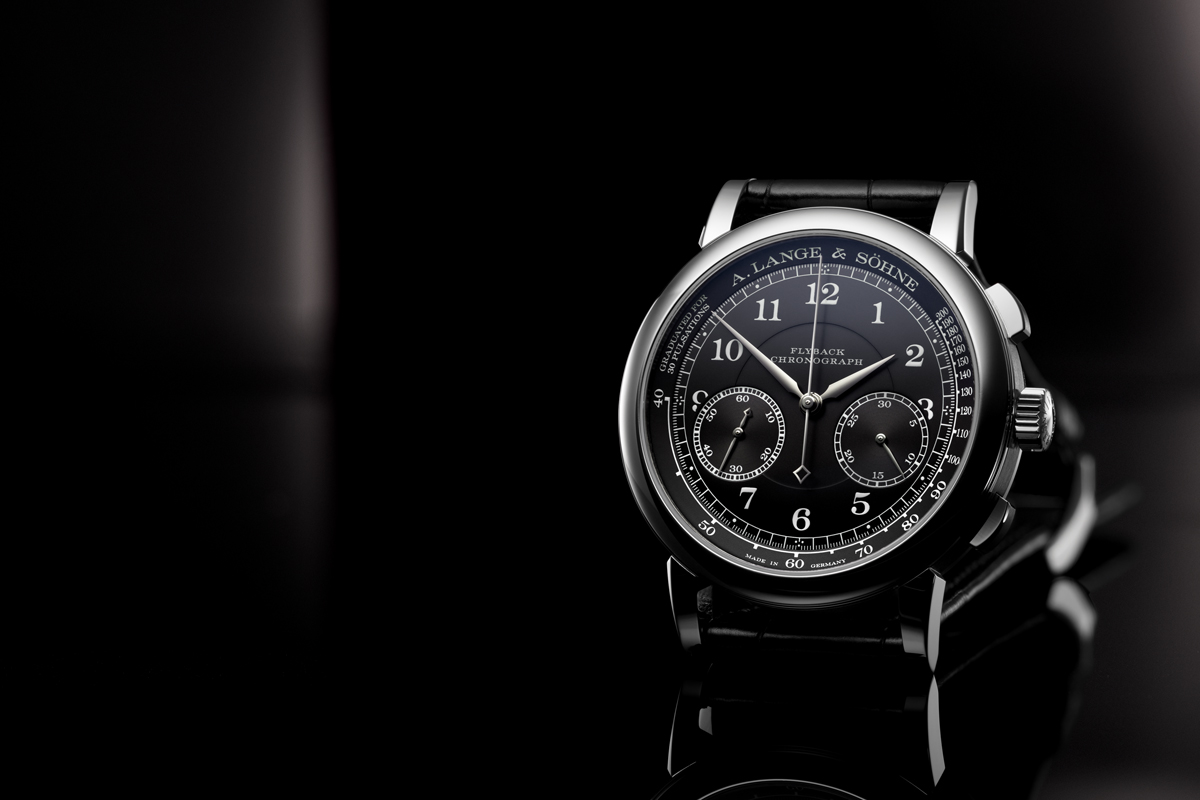 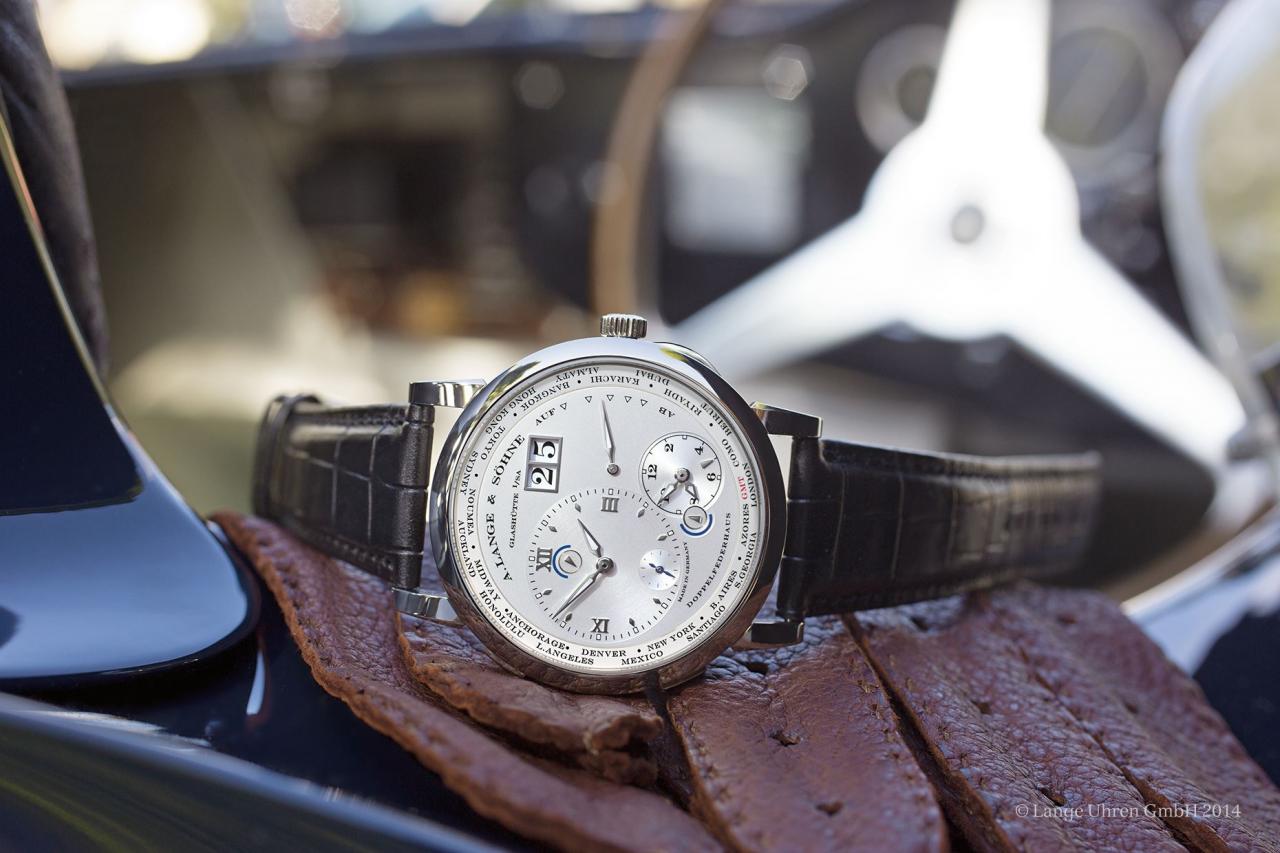 For A. Lange & Söhne, elegance and functionality are qualities that are constantly expressed and measured with each passing second.