In October 1994, A. Lange & Söhne presented the first collection of the new era, including the Tourbillon “Pour le Mérite”, the first wristwatch with a tourbillon and a fusée-and-chain transmission. It was followed in 2005 with a further model in which these two elaborate constructions were united: the Tourbograph “Pour le Mérite”. But there was more: a chronograph with the rattrapante function made it the manufactory’s most complicated watch at the time.

Now, the movement has been endowed with a fifth complication. In the development phase, the integration of a perpetual calendar in the Tourbograph Perpetual “Pour le Mérite” presented the engineers of the Saxon manufactory with a formidable challenge: to orchestrate the interaction of the complex mechanisms in such a way that mechanical conflicts or unwanted energy losses could be prevented. In this project, the perpetual calendar mechanism had to be built around the tourbillon. Consequently, only about two thirds of the movement surface were available, and this necessitated a redesign of the basic calibre. At the same time, the developers did not want to noticeably increase the height of the movement.

The Tourbograph Perpetual “Pour le Mérite” is the epitome of classic watchmaking: its hallmarks permeate all domains from design and engineering to consummate, flawless artisanship. The dial itself reflects the traditional approach in timekeeping. Arabic numerals, a railway-track minute scale, blued steel hands for the time and rhodiumed gold hands for the calendar as well as the cloverleaf arrangement of the subsidiary dials pay tribute to the famous A. Lange & Söhne pocket watches. Tradition also governs technical details such as column-wheel control for the chronograph and rattrapante mechanisms as well as the screw balance. Finally, it manifests itself in typical quality elements such as the two diamond endstones that suspend the tourbillon cage or the black-polished tourbillon bridge. 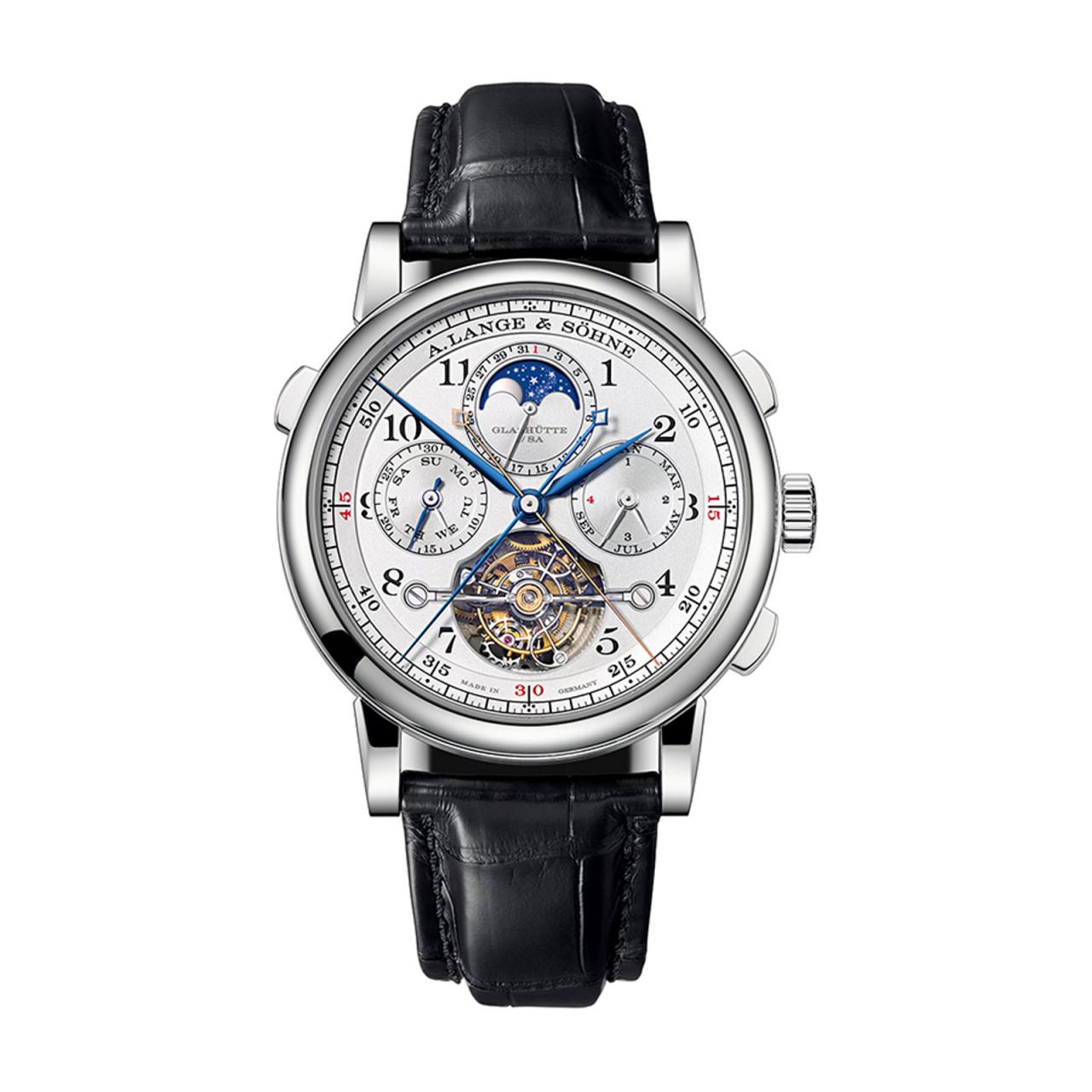 The stately platinum case with a diameter of 43 millimetres houses a manual-winding movement. Of the 684 parts of the new L133.1 manufacture calibre, no fewer than 206 constitute the perpetual calendar with its analogue displays. It will correctly indicate the duration of each month until 2100. A one-time correction will be needed on the last day of February in this secular year. From then on, the calendar will again be correctly calibrated for the next hundred years. It has three subsidiary dials. The date at 12 o’clock and the day at 9 o’clock are indicated with rhodiumed gold hands. The month and leap year are both displayed at 3 o’clock. The upper half of the analogue date also accommodates the moon-phase display which is calculated to remain accurate for 122.6 years. Its deep-blue disc is made of solid gold. During the development of the calendar module to be built around the tourbillon, great emphasis was placed on space-saving architecture.

Apart from the two chronograph pushers on both sides of the crown, a third button at 10 o’clock modestly reveals that the Tourbograph Perpetual “Pour le Mérite” deserves a place in the top-tier category of split-seconds chronographs. The fascinating function of the split-seconds mechanism can be observed in great detail with a look through the sapphire-crystal caseback. The precise control of the gold-plated chronograph hand and the blued rattrapante hand is handled by two column wheels. During a complete revolution of the 30-minute counter at 9 o’clock, as many lap times as needed can be stopped. 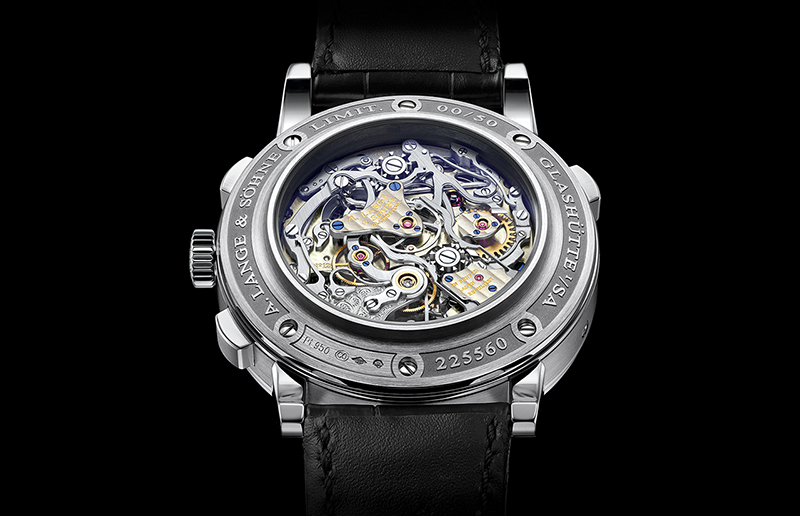 Nowadays this watch is available since the Datograph Auf/Ab; the movement has been improved and a power-reserve screen has been added. There’s also a version with a perpetual calendar, the Datograph Perpetual.The Lange 31 was named because of its power book: an astounding 31 days. These include two stacked barrels, each having a powerful mainspring that is 1.85 meters long, several times longer than a standard mainspring. The barrels are 25 mm round and occupy three-quarters of this movement diameter.With a power reserve this long, and springs this strong, the amplitude of the balance would decline considerably over time if nothing had been done to maintain it. But Lange has positioned an advanced constant-force apparatus involving the twin mainspring barrels and the escapement. It ensures a continuous stream of force, independent of their tautness or slackness of their mainsprings. It achieves this with the aid of a helical, pretensioned spring (a so-called remontoir spring), which can be retightened every 10 seconds, and, over the subsequent 10 seconds, provides energy to the escapement. There are minimal changes in torque throughout the 10 seconds, but the energy exerted stays nearly constant on average throughout the 31 days. When that period has elapsed, an additional mechanism just stops the opinion.

The combination of a perpetual calendar with a split-seconds chronograph is very rare. Power management is an especially challenging undertaking. In particular, the simultaneous use of several functions calls for mechanical ingenuity, for instance when the calendar indications advance around midnight and the stopwatch function is used at the same time.

In the way they flawlessly interact, the tourbillon and the fusée-and-chain transmission offset two disruptive phenomena in a mechanical movement: gravity and waning spring force. Thus, they contribute to improved rate stability and rate accuracy. The L133.1 movement that works inside the Tourbograph Perpetual “Pour le Mérite” is already the tenth calibre with the delicately linked mechanism that overcomes the pull of gravity. The traditional black polish of the tourbillon bridge integrated in the dial imposes new challenges on the finisseurs because for the first time ever, this complex finishing technique is being applied to a curved surface.

The results of A. Lange & Söhne’s efforts to develop intelligent energy management systems for mechanical movements – and thus to compensate for the unavoidable torque loss of the mainspring barrel – include three different constant-force escapements as well as the fusée-and-chain transmission which was integrated in a wristwatch for the first time in 1994. It is the technical hallmark shared by all timepieces identified by the attribute “Pour le Mérite” in reference to the erstwhile Prussian order conferred for exceptional scientific merit. Via a fusée connected to the spring barrel with a chain, the force of the main- spring is delivered to the movement in constant increments thanks to the ingenious way in which the principle of levers is harnessed. A planetary gearing mechanism inside the fusée assures that the flow of power from the mainspring barrel to the escapement is not interrupted while the watch is being wound. The filigreed yet robust mechanism requires the utmost in attention as regards design, production, finissage, and assembly.