In the search for a photographic technique that reflects the traditional crafts of the manufactory and simultaneously offers new forms of expression, A. Lange & Söhne made use of the collodion wet-plate process for the first time. Like the manual precision required in the manufacture of every Lange timepiece, the traditional wet-plate process similarly demands the ultimate in patience, care and attention to details. Everything in the collodion wet-plate process is done by hand. This elaborate process was invented in 1851 by the British pioneer of photography Frederick Scott Archer. The method relies above all on the order in which the processes are performed and on very precise timing. The enormous effort involved is rewarded by the incomparable visual signature of the resulting image. This is how the unique portraits of the new timepieces created in 2017 were made.

The slow and painstaking, step-by-step method leads, at most, to only a few photographs each day. However, the results are impressive images that perfectly mirror the contemplative work process and the desire for historic authenticity. At a three-day studio session in early December, seven of the new Lange timepieces for 2017 were captured on glass plates with this historic technique:
– the Tourbograph PerpetualL “Pour Le Mérite” combining five complications in a masterpiece of precision watchmaking
– the Lange1 Moon Phase with an integrated day/night indicator
Audemars Piguet might in reality have made not only the gongs but the entire motion: in these days, it was common for European watch companies to purchase raw movements from Swiss companies and finish them for their own specifications.The watch virtually dropped into oblivion. Back in 2001, a married couple brought it to Lange’s headquarters at Glashütte to learn whether it were worth repairing. A housekeeper they knew had received it as a gift more than the usual half-century earlier. The answer wasn’t obvious. In a book about the watch that the company published in 2010, Lange watchmaker Jan Silva explained the watch’s state: “Where there would typically be a complex, delicate mesh of bridges, springs and brakes, there was nothing to be seen however a gray-brown, amorphous mass …. Only the larger components of the movement were still recognizable.” Silva led a group of four watchmakers that restored the movement to pristine condition. It took five years; the dismantling procedure alone took three months.The watch’s case was designed from the industrial designer Carl Ludwig Theodor Graff in the Louis XV style. The front bears an engraving of this goddess Minerva; the back is adorned with all the initials “G.S.” No one knows whose initials they are. Unlike the motion, the case and the dial were in excellent condition once the watch resurfaced in 2001.
– the distinctively classic 1815 Annual Calendar
– the Richard Lange JumpingG Seconds with a one-second constant-force escapement
– with an impressive 31-day power reserve, the Lange 31 in white gold with an elegant grey dial
– the Little Saxonia with a mother-of-pearl dial 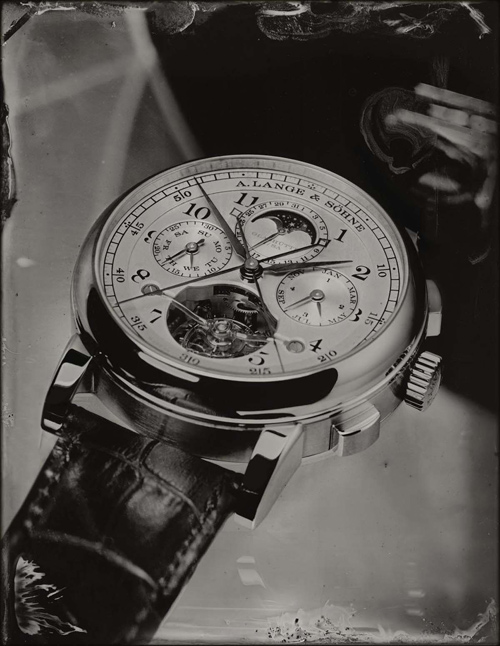 Photographing the new timepieces entails a process similar to previous studio sessions – at least in terms of preparing the motif. As usual, the key tasks involve finding the ideal position for the timepieces, providing the perfect lighting as well as ensuring optimum focus and the desired depth of field. What is special about this historic technique are the complicated steps of the procedure that are essential for every single photograph taken: the meticulous preparation of the glass plates and the developing process in the laboratory.

In a first step, a glass plate is coated with collodion, a liquid photosensitive base. This is made by dissolving cellulose nitrate in ether and alcohol and subsequently adding a soluble iodide. Around a dozen different chemicals are used in the process before the finished image can be seen. 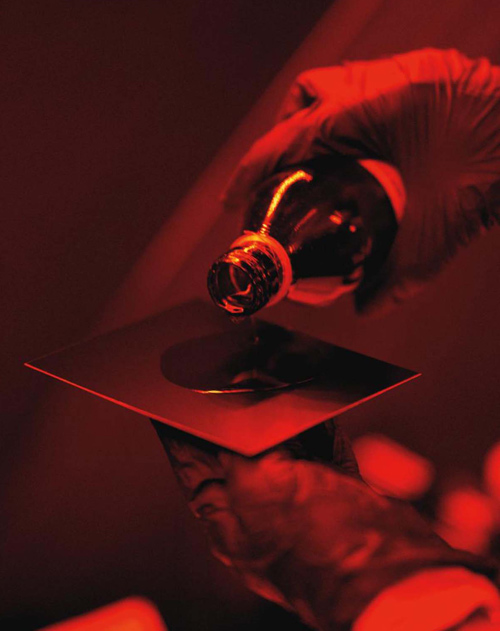 In the darkroom, the coated plate is dipped into a dish containing silver nitrate solution. In this phase, the iodine salts are chemically replaced by light-sensitive silver iodide and silver bromide particles that are evenly distributed in the collodion coating. The wet plate prepared in this way is placed in a light-tight plate holder and slid into the camera.

The low sensitivity of 1 to 2 ASA demands exposure times of several minutes or an extremely strong source of light. Exposing the plate to light initiates a chemical reaction in the light-sensitive coating, the results of which first slowly appear in a developing bath in the red light of the darkroom.

As the process only works while the plate is still wet, the exposed plate must be developed immediately. If the plate dries out, the enormous effort is wasted. Depending on the ambient temperature, the photographer must complete the entire process from coating the plate to developing the final image within a period of only five to fifteen minutes.

After developing, the images must be fixed, watered and dried before they can be coated and made ready for subsequent scanning. The effort involved is amply rewarded. The results are unique and almost magical photographs with impressive contrast and brightness that seem to be from another age. Photographs made by the collodion wetplate method can be enlarged to many times their original format without any loss of sharpness. 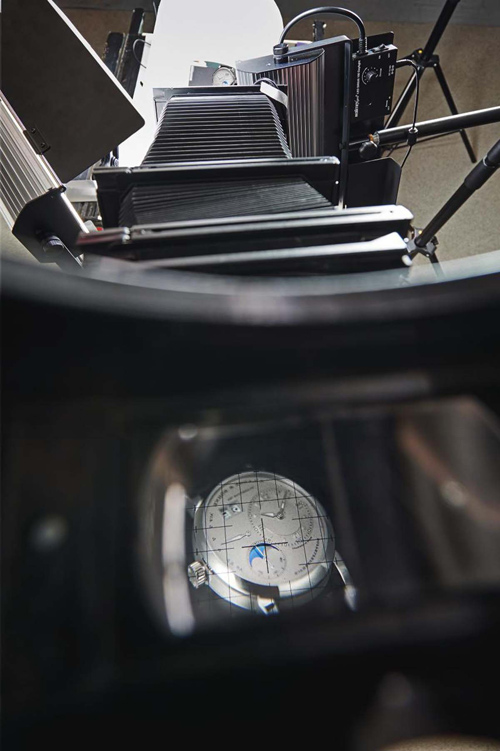