Eight young watchmakers from seven countries are participating in this year’s “F. A. Lange Scholarship & Watchmaking Excellence Award”. In early May 2017, they were acquainted with Lange watchmaking artistry in Glashütte and Dresden, and received the competition assignment. This year, it involves the development of a regulator. The 10,000-euro prize will be awarded next December.
The Grande Complication is currently on loan to the Mathematics and Physics Salon, a museum in Dresden dedicated to historic timepieces and scientific instruments.In 1990, right after German reunification, the German automotive company VDO bought the title “A. Lange & Söhne” and established a brand new A. Lange & Söhne, based, like the first firm, in Glashütte. (In 2000, the Richemont Group acquired A. Lange & Söhne.) One of the new firm’s first watches, the Lange 1, established in 1994, became Lange’s signature style, exactly what the company refers to as its “face.” The Lange 1, which looks the same as it did 20 years ago, has a distinctive, asymmetrical dial with a big-date screen and “Auf/Ab” power-reserve index. It contained the hand-wound Caliber L901.0, with 2 barrels, a three-day power book, nine screwed gold chatons, Glashütte three-quarter plate, a hand-engraved balance penis and elegant swan’s-neck fine adjustment mechanism. (Before this year, the company replaced that caliber using a brand new one, additionally hand-wound.)

A. Lange & Söhne has been hosting global competitions for young watchmakers since 2010. For Lange CEO Wilhelm Schmid, this is rooted in a voluntary commitment to talent promotion associated with the history of the brand.

As in previous years, the competition spans several phases. The kick-off took place early this year with an invitation circulated to over 30 watchmaking schools. The candidates were nominated by their schools and eight of them were chosen. They visited Dresden and Glashütte from 2 to 6 May 2017. Apart from a manufactory tour, the extensive programme also included various workshop sessions focused on artisanship. Furthermore, they assembled a Lange calibre, an assignment that because of the sensitive German silver parts represents a big challenge even for experienced watchmakers. 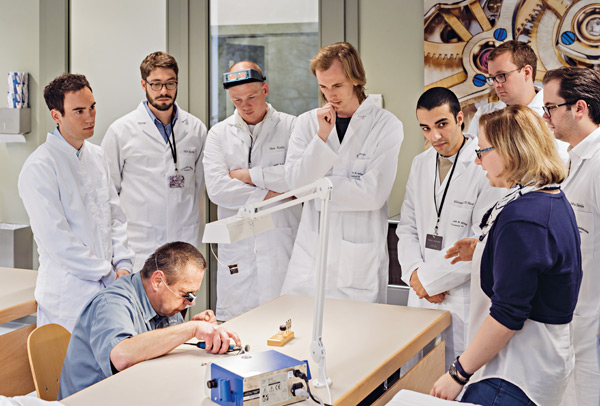 This year again, the highlight for the participants was the announcement of the competition assignment by Anthony de Haas, director of Product Development at A. Lange & Söhne. They have six months to design and build a regulator. A base movement of ETA will be provided for this purpose.  In the past, regulators were used to adjust other timepieces. Their key function is to precisely indicate the minutes on the main dial to ensure error-free synchronisation. Two separate subsidiary dials display the hours and seconds.

An expert jury will appraise the submitted solutions in November. The winner will be announced in December.