Since the creation of the Ladies’ High-Mech category in 2013, the Grand Prix d’Horlogerie de Genève has crowned three winners featuring an animated and poetical time display, as well as last year’s more traditional laureate with its Tourbillon with Golden Bridge.

This year, the six shortlisted candidates include two traditional models with classic moon phase displays showcasing astronomical precision and, at the other end of the spectrum, two poetic complications. Occupying the middle ground are a supremely feminine tourbillon and another model marrying mechanical mastery with floral motifs, both equally capable of winning over the jury.

Now this view is available as the Datograph Auf/Ab; the movement has been improved along with a power-reserve display was added. There’s also a variant with a perpetual calendar, the Datograph Perpetual.The Lange 31 was known for its power reserve: an astonishing 31 days. The watch includes in-house Caliber L034.1, with 406 components. These include two stacked barrels, each with a strong mainspring that’s 1.85 meters long, a few times longer than a standard mainspring. The barrels are 25 mm across and occupy three-quarters of this movement diameter.With a power reserve this long, and springs this strong, the amplitude of the balance would diminish considerably over time if nothing were done to keep it. However, Lange has set an innovative constant-force device between the twin mainspring barrels as well as the escapement. It guarantees that a continuous flow of force, independent of the tautness or slackness of their mainsprings. It achieves this with the assistance of a helical, pretensioned spring (a so-called remontoir spring), which can be retightened every 10 seconds, and, over the subsequent 10 seconds, delivers energy to the escapement. There are minimal fluctuations in torque during the 10 seconds, but the energy exerted stays nearly constant on average during the 31 days. When that interval has elapsed, an additional mechanism just stops the opinion.

The Petite Lange 1 Moonphase by A. Lange & Söhne is the epitome of watchmaking tradition and precision, as we have come to expect from the German watchmaker. Its new manually-wound, hand-decorated and hand-assembled Calibre L121.2 has a cam-poised balance with an in-house crafted hairspring, and provides a power reserve of 72 hours. The moon phase is so accurate that it needs adjusting by just one day every 122.6 years. Complete with a date and power reserve, this elegant pink gold watch with its exquisitely guilloché-finished dial is the candidate that offers the most functions of the six. 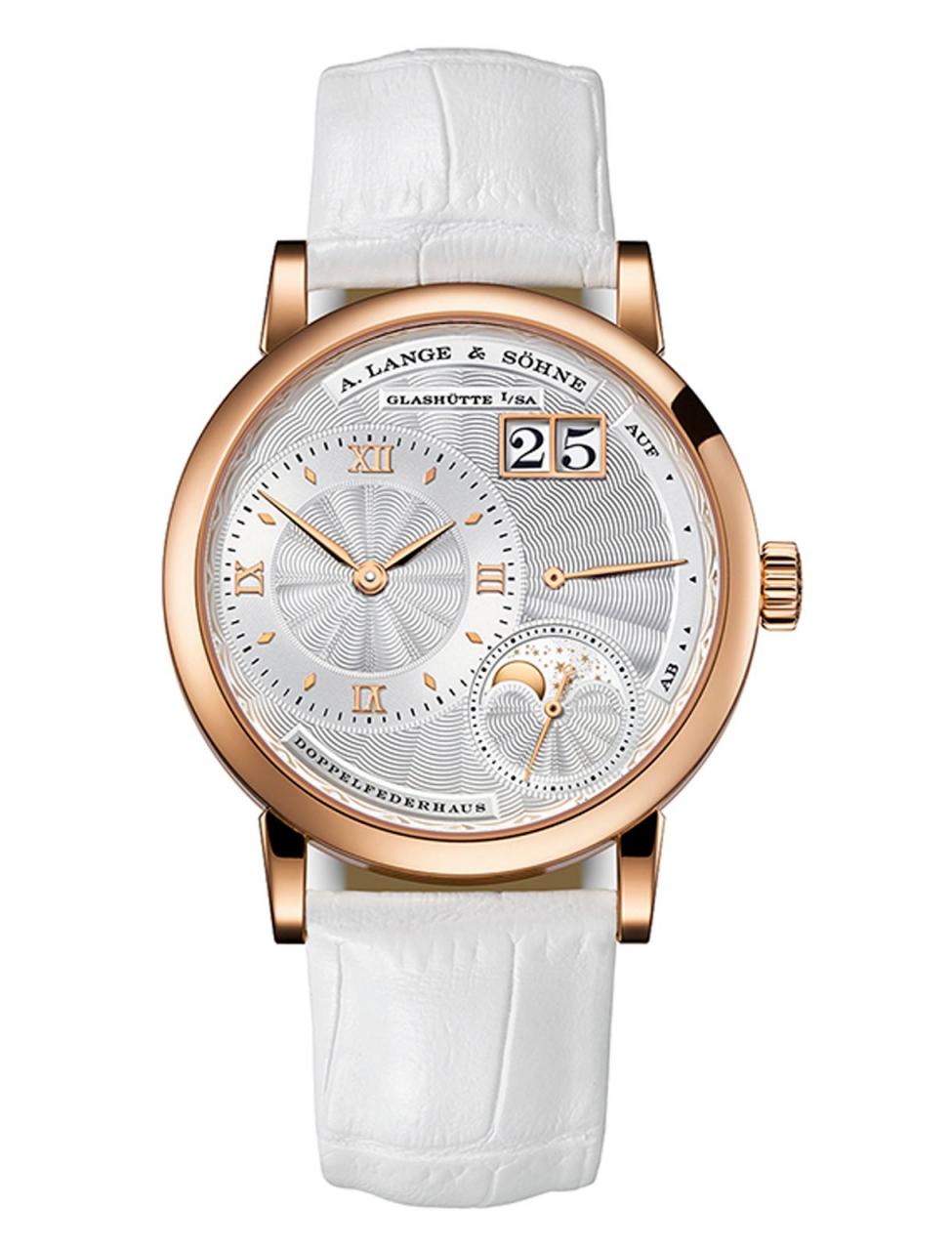 As its name suggests, the Cat’s Eye Celestial by Girard-Perregaux places the cosmos at the heart of the dial, with an oversized representation of a moon phase display against a starry sky, executed in mother-of-pearl marquetry and aventurine glass. As well as beauty, Girard-Perregaux also guarantees extreme precision: the moon phase is driven by wheel with 135 teeth, and correction is required just once every 360 years. The moon phase is coupled directly to the barrel, ensuring a smooth display. The automatic manufacture movement inside the pink gold diamond-set case is superbly finished. 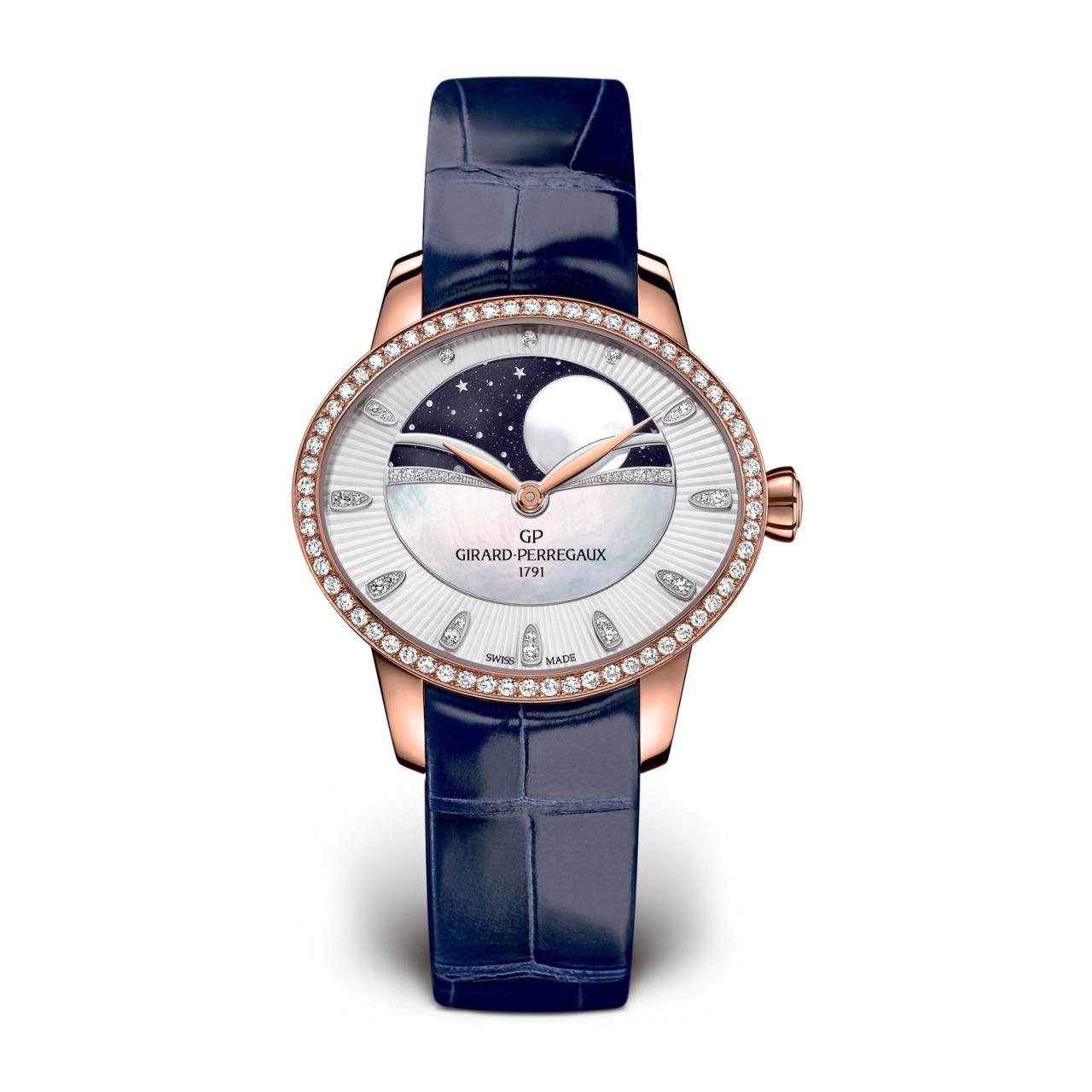 The boldly graphical dial of the Lady Arpels Papillon automaton watch is a feast of shapes and colours featuring diamonds, coloured sapphires, mother-of-pearl, enamel and painting. The time is displayed in traditional fashion by white gold hands, discreetly positioned on the right of the dial. Every few minutes, the eyes are drawn to the butterfly that beats its wings randomly depending on the state of the power reserve – every 2 to 4 minutes when the watch is not being worn, and more often when on the wrist. This animated module developed exclusively for Van Cleef & Arpels can also be triggered on demand, at the push of a button. 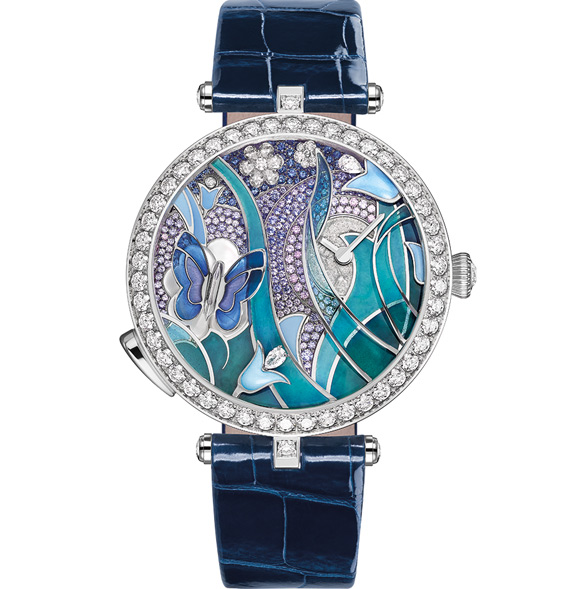 Chaumet has dispensed with hands altogether, choosing to mark the hours and minutes with two sculpted, engraved and diamond-set doves that swoop around a star-spangled cloudy sky in deep blue enamel. The central dove indicates the hours, while a second dove revolves around the outside to show the minutes, with the help of the ring its holds in its bill. The Creative Complication Colombes, in a limited edition of 12 pieces, is an ode to love – and to love of fine watchmaking. It is driven by an automatic movement designed and developed exclusively for Chaumet. 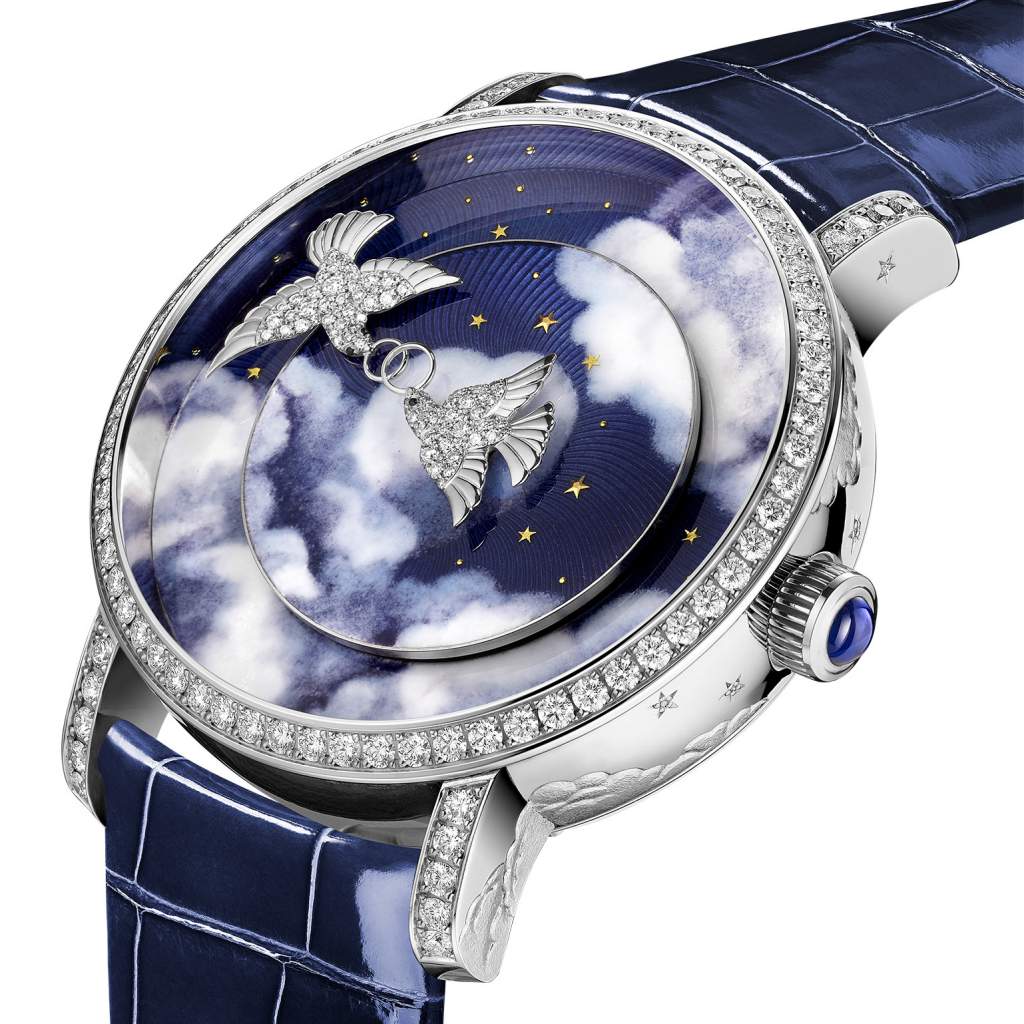 The MasterGraff Floral Tourbillon offers not just a mechanical tourbillon but also a floral ballet composed of revolving blooms. The petals are cut out of white gold by hand, then tinted with Grand Feu enamel, ensuring that no two watches are exactly alike. The shape of the petals is mirrored in the hands and the tourbillon bridge. The tourbillon movement, specially designed for this ladies’ watch, offers a 68-hour power reserve. 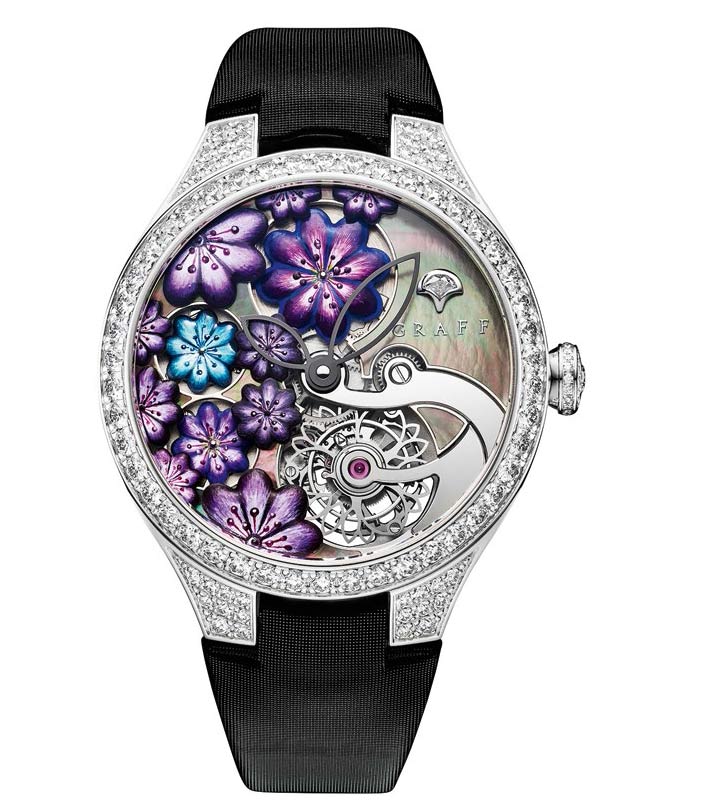 The ethereally graceful Tortue watch entered by Claude Meylan has a unique dial architecture, with hours and minutes displayed at 12 o’clock, a bridge decorated using an innovative printing technology on the right, the escapement and gear train on the left, and a gem-set rotor at 6 o’clock. 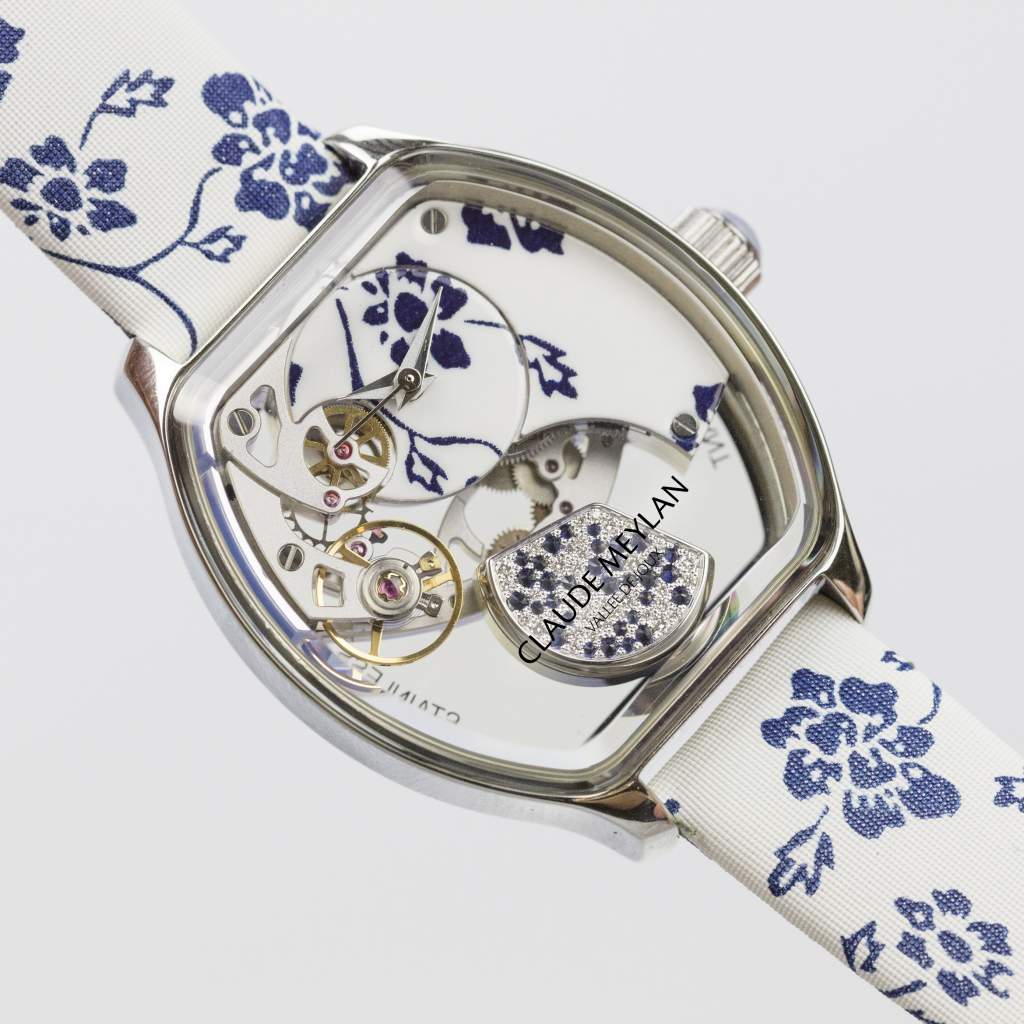