Audemars Piguet may in reality have made not only the gongs however, the entire movement: in those days, it was common for European watch companies to purchase raw motions from Swiss companies and finish them for their own specifications.The watch almost dropped into oblivion. In 2001, a married couple brought it to Lange’s headquarters in Glashütte to learn whether it were worth fixing. A housekeeper they understood had received it as a gift more than a half-century earlier. The answer was not obvious. In a publication about the opinion that the company published in 2010, ” Lange watchmaker Jan Silva explained the watch’s state: “Where there could normally be a complicated, delicate mesh of springs, bridges and wheels, there was nothing to be seen however a gray-brown, amorphous mass …. Just the larger components of the motion were still identifiable.” Silva led a team of four watchmakers that restored the motion to pristine condition. It required five years; the dismantling process alone took three months.The see’s case was designed from the industrial developer Carl Ludwig Theodor Graff in the Louis XV style. Front bears an engraving of this goddess Minerva; the rear is adorned with all the initials “G.S.” No one understands whose initials they are. Contrary to the motion, the situation and the dial were in excellent condition when the watch resurfaced in 2001.

The 1815 Annual Calendar is the second A. Lange & Söhne timepiece endowed with the eponymous calendar function. But in contrast to the self-winding Saxonia Annual Calendar with an outsize date presented in 2010, the new model features a manually wound movement and an analogue date, following the classic design and style principles of the 1815 collection. The manual winder is also a subtle homage to Ferdinand Adolph Lange. In 1866, he obtained a patent in the USA for his development of a crown winder that would replace the hitherto commonplace key-operated winding works, referring to it as “a useful mechanism for winding and setting watches”.

Hovering over the argenté-coloured background of the classic dial, blued-steel hands indicate the time, complemented by the contrast-rich black Arabic numerals and the peripheral railway-track minute scale. Calculated to remain accurate for 122.6 years, the moon-phase display is integrated into the subsidiary seconds dial at 6 o’clock. The calendar indications are easily legible thanks to the golden hands of the two subdials that are aligned with the horizontal centre axis. On the left, they display the day and on the right the month. From March to January, all month durations are correctly indicated. Although it is shorter, the mechanism treats February as a 30-day month, so on 1st of March, a manual correction must be performed. A button at 2 o’clock makes it possible to collectively advance all indications, for instance if the watch has stood still for a longer period of time. Additionally, three recessed push pieces allow separate corrections of the day, month and moon phase. For the first time in a Lange calendar model, the date can also be separately advanced with an additional recessed push piece. 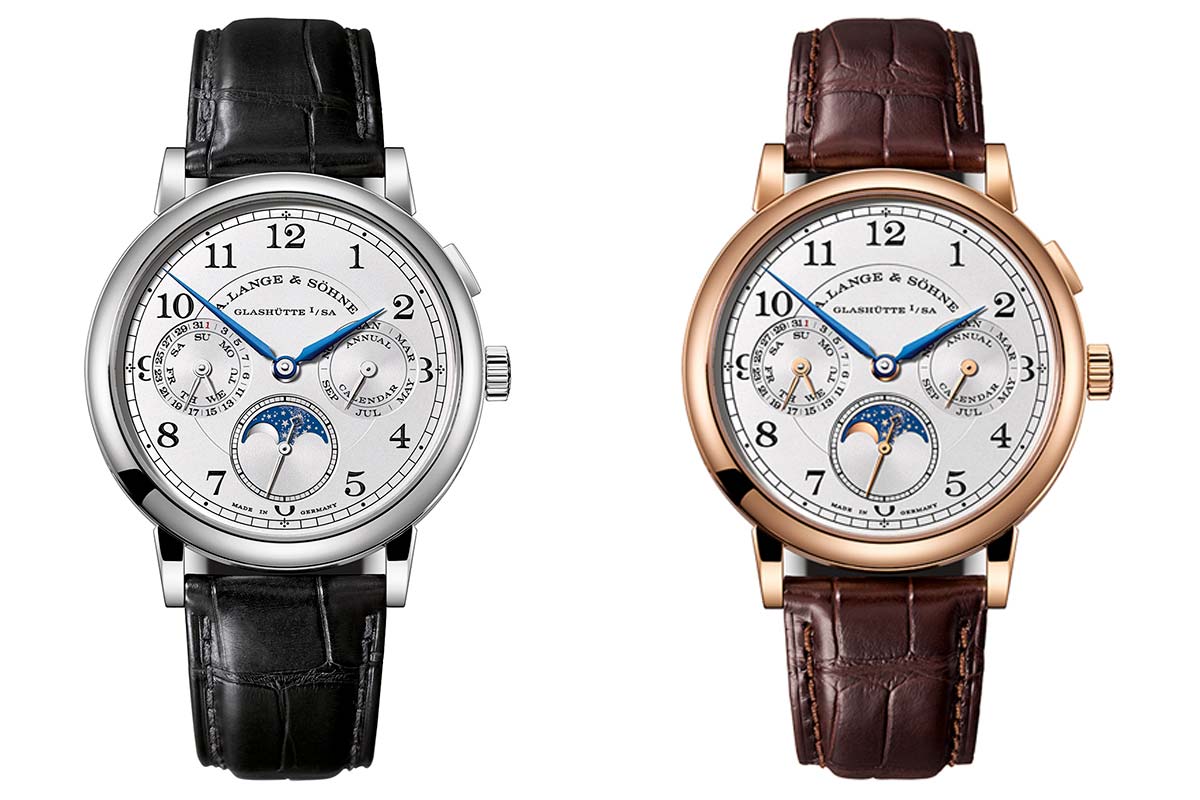 Because the calendar module is only 1.4 millimetres high, the complete movement is very slender. Despite its compactness, the new manually wound calibre L051.3 has a maximum power reserve of 72 hours. One detail is instantly noticeable at a glance through the sapphire-crystal caseback: as a pointer to manual winding, the ratchet and crown wheels are visibly integrated into the German-silver three-quarter plate and decorated with solarisation. Screwed gold chatons, the screw balance, the whiplash spring and the hand-engraved balance cock round out a movement finished to the standards of traditional Saxon watchmaking artistry.