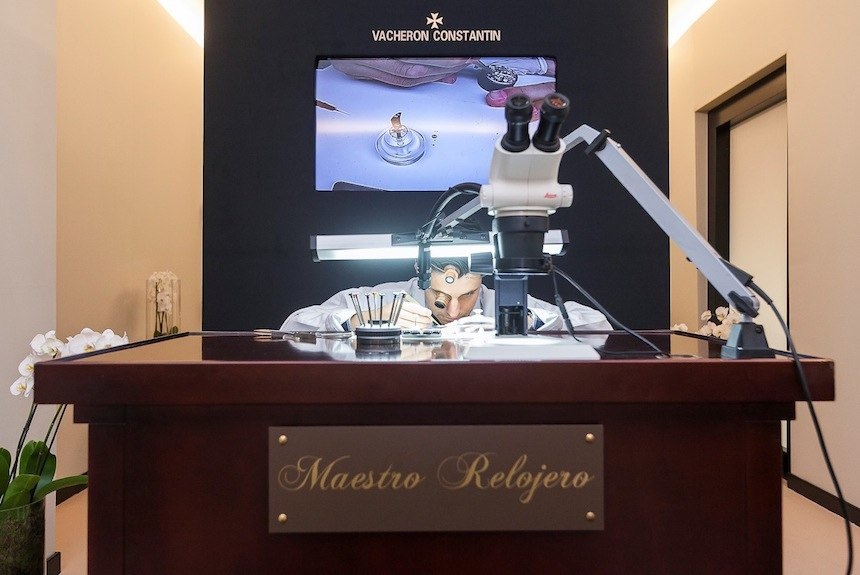 June 11-14, 2015, saw the Salón Internacional de Alta Relojería (SIAR) opening its doors once again, this year in Spain, as a sister event to SIAR Mexico City. SIAR Madrid is really a spin-off event (run by most of the same people) from the long-standing salon held in México that aBlogtoWatch founder Ariel covered for its 2014 event here. This was the second edition and, for what I hear from the exhibiting brands, the outcome was pretty decent, which augurs a third edition. 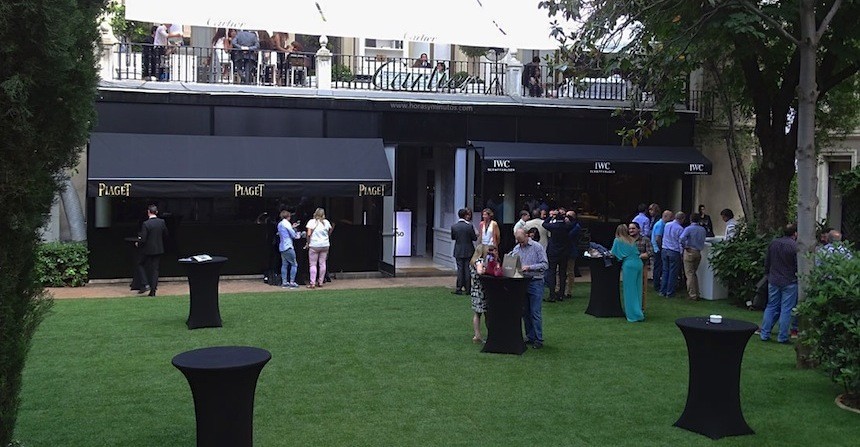 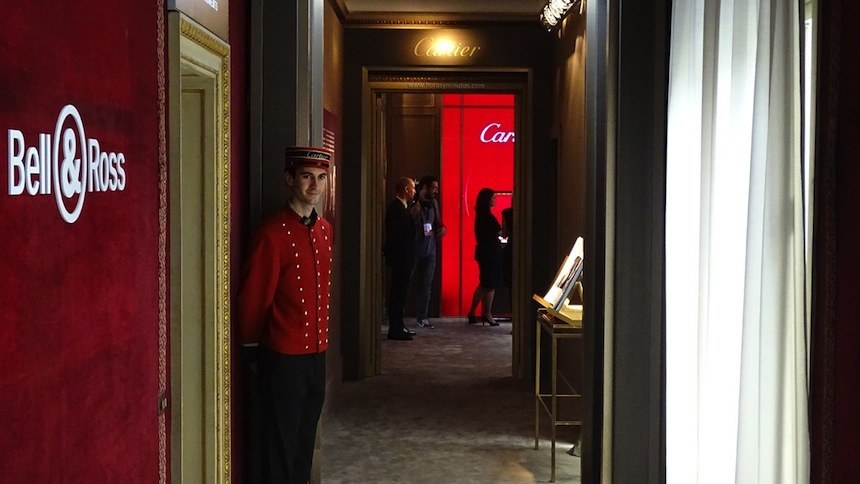 The preamble was not very promising, though: after days of scorching heat, Madrid was hit by a monsoon, a freak downpour which flooded the city. It proved two things: Swiss watches are water-resistant, but provisional outdoor tents are not to be trusted in heavy rain. Following the deluge, exhibitors (some of them at least) raced to the scene at 3am to get things ready to fall in – which they did, for the most part. 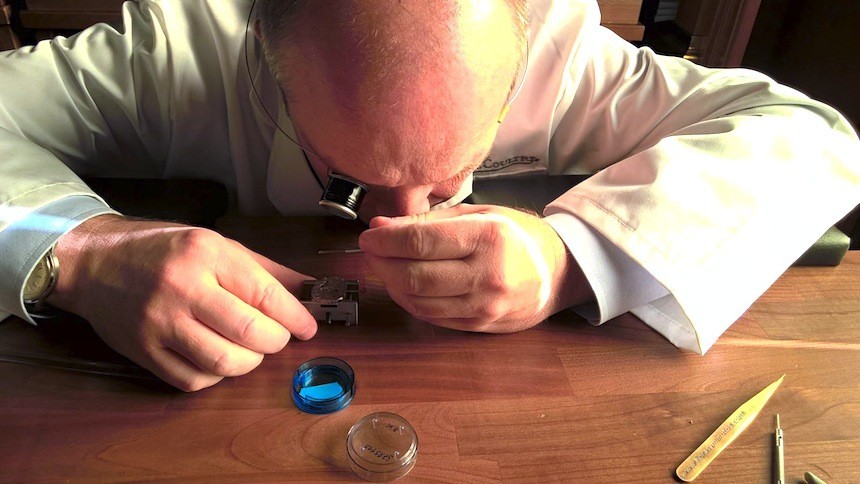 SIAR Madrid 2015 was held in a nineteenth century mansion with a certain opulent decadence, an appropriate venue for the thirteen luxury Swiss watch brands in attendance. The main garden led to the Audemars Piguet stand, located in what was originally an indoor pool. The atmosphere was really agreeable. It was a bit like the SIHH but far more relaxed, with all the exhibitors willing to show and allow you to film and photograph the pieces for as long as you want. Two days were set aside for the press, and the last two days the doors were opened to the public, offering a unique opportunity to appreciate the watches that we would otherwise only see in press releases. The brand representatives actually encouraged conversations with professionals, collectors, and aficionados in a relaxed mood. 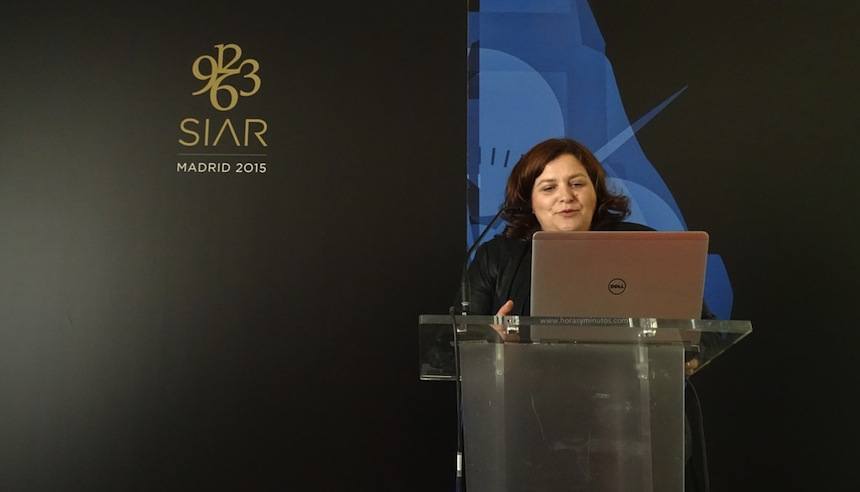 In addition to the exhibiting brands, SIAR hosts press conferences. I personally attended conferences by Cartier’s Carole Forrestier, Bell & Ross’ Carlos Rosillo, and Bartomeu Gomila – the Spanish Master Horloger who created the Time Writer II for Minerva-Montblanc back in 2012.

Some brands had watchmakers on show assembling calibres to give visitors an idea of the nearly – and sometimes downright – microscopic world they deal with. It is amazing how with all the noise, they can still concentrate and manage parts that often are less than a millimeter long.

Another activity at SIAR Madrid 2015 was the Master Class workshops – organized by IWC and Jaeger-LeCoultre – in which attendees were invited to assemble a real caliber. I was lucky enough to attend the one by Jaeger-LeCoultre and confront the caliber 986 which is inside the Grande Reverso Duoface. The concentration required to manage the tweezers, the screwdrivers, and the eye loupe is so demanding that at times you wonder why you are spending more time on your hands and knees than at the bench – especially when one of the tiny parts springs out of control and gets lost somewhere. But in the end, with some help from the master watchmaker on hand, the balance wheel miraculously started to move, and I felt an enormous sense of accomplishment.

But I guess what everybody wants to know are which watches were shown at the SIAR Madrid 2015. It is not all of them, of course, because the brands came with quite a repertoire, but let’s point out the most important ones. 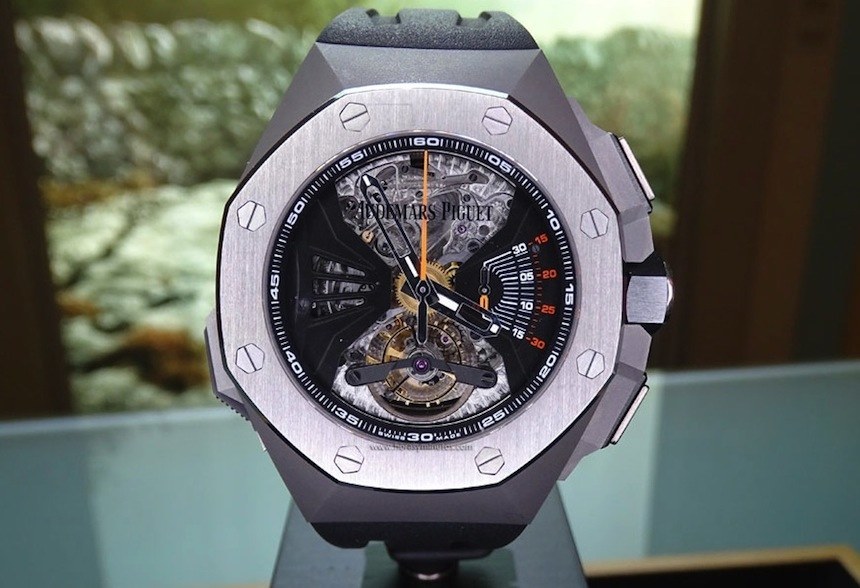 Apart from around 20 historic pieces from Audemars Piguet’s museum, the manufacture showed its two concept watches. One was the Audemars Piguet Royal Oak Concept RD 1, a minute repeater with a surprisingly loud sound. I was skeptical when it was first announced, but I must admit, I was very wrong. To give you an idea of the exceptional sonority of this watch, Claudio Cavaliere, AP’s Global Brand Ambassador, took ten steps away from my position at the bar. When he activated the repeater, the barman had the brilliant idea of pouring ice cubes into a bucket, but I could still hear it! Outstanding. 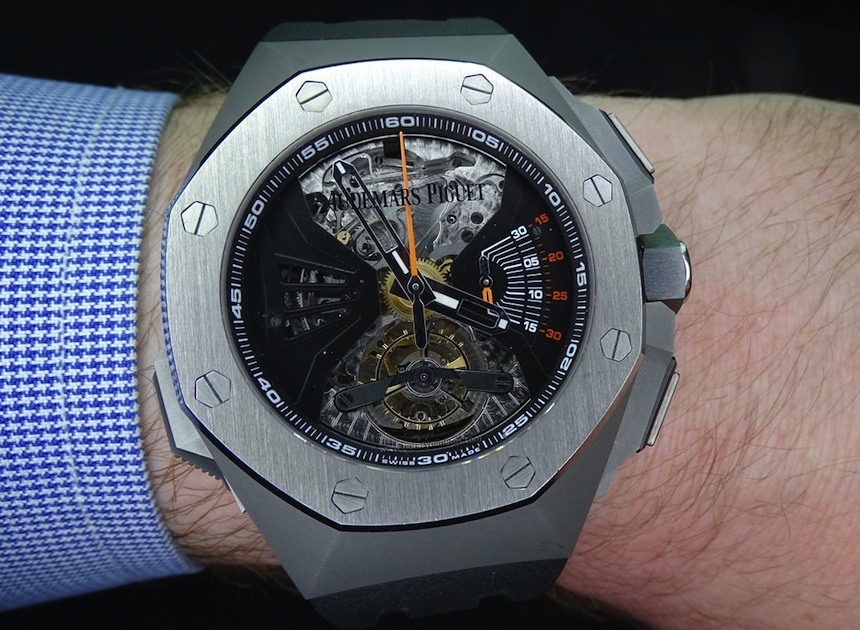 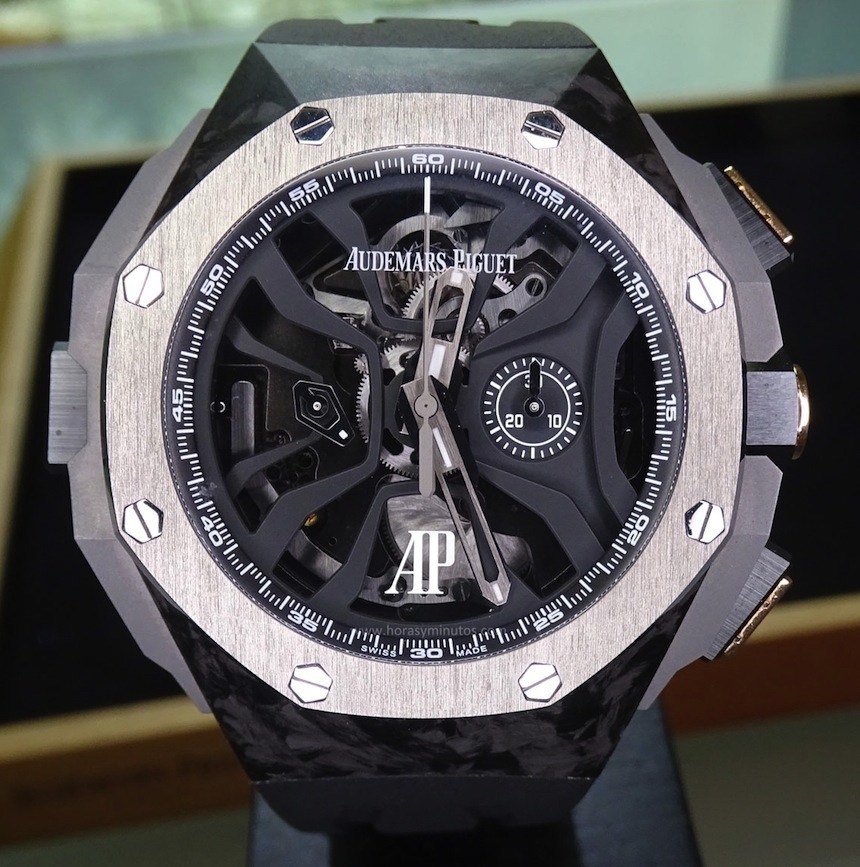 There was also the Audemars Piguet Royal Oak Concept Laptimer Michael Schumacher (article here), which is hands down the most complicated chronograph out there. While there is a detailed explanation in the linked article, I have done a video explaining it (in Spanish) to help understanding the complex functioning of the chronograph. 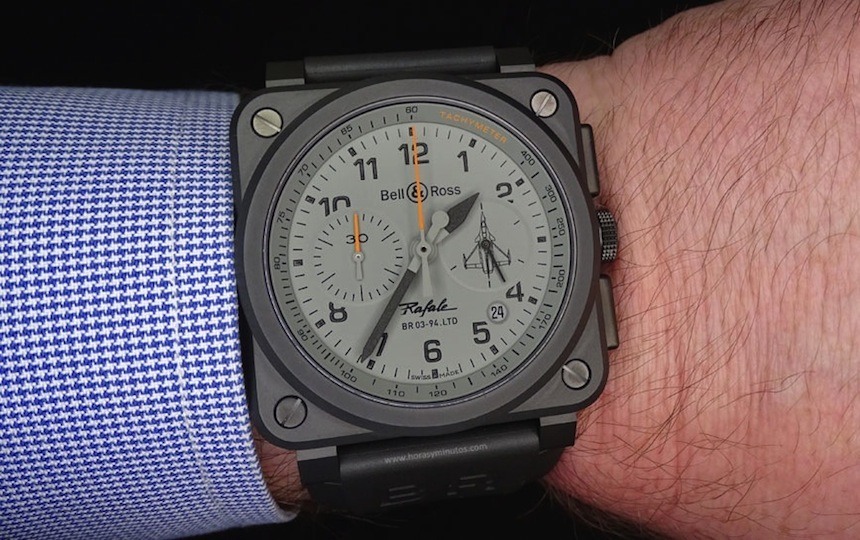 Bell & Ross displayed around 50 of its models, including its latest chronographs such as the Bell & Ross BR 03 94 Rafale and the BR 126 Carbon Orange. Incidentally, I saw Carlos Rosillo with his Bell & Ross WW 1 Edición Limitada – his cigar-themed watch – smoking a cigar with a band that included his family coat of arms. Not bad, huh?

The powerful maison invaded SIAR Madrid 2015 with its creations, dedicating one whole room to the new Clé de Cartier. We were also shown the mighty Rotonde de Cartier Astrotourbillon Skeleton (read more about the Astrotourbillon here), with its ethereal but at the same time blunt presence. 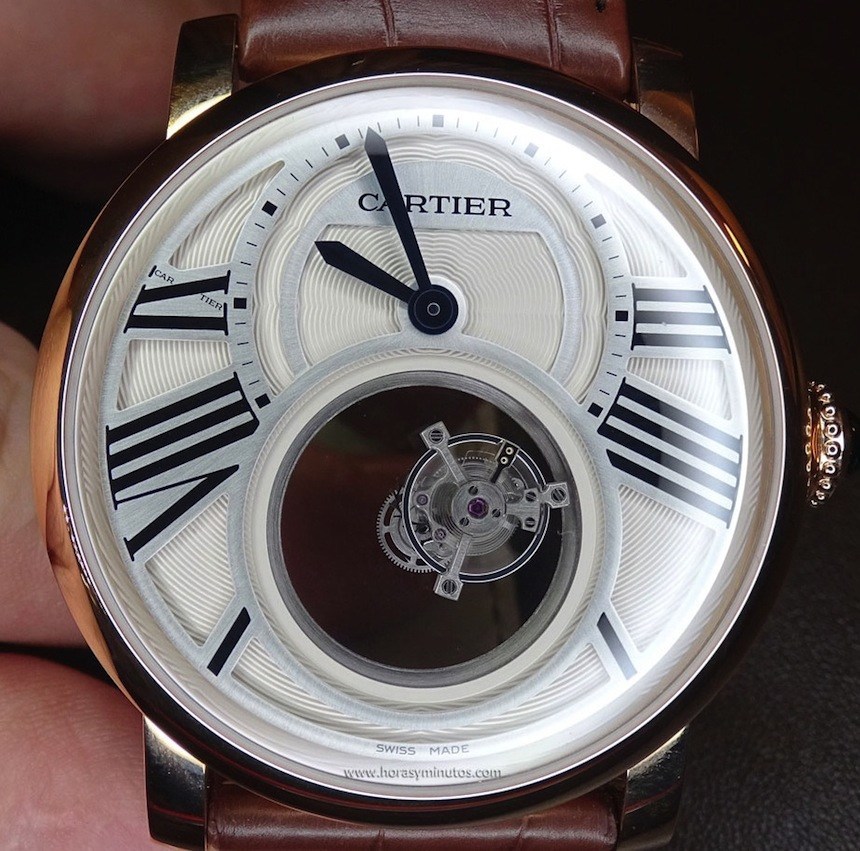 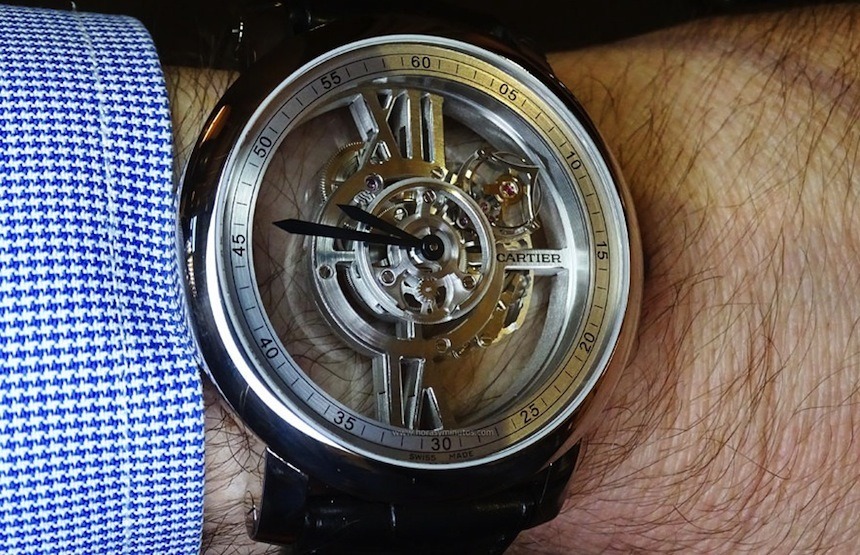 The maison’s favourite cat was also in Spain with the Cartier Rêves de Panthères watch, one of the hits of the year, as well as the spectacular Rotonde de Cartier Double Tourbillon Mystérieux, with two tourbillons floating on each side. 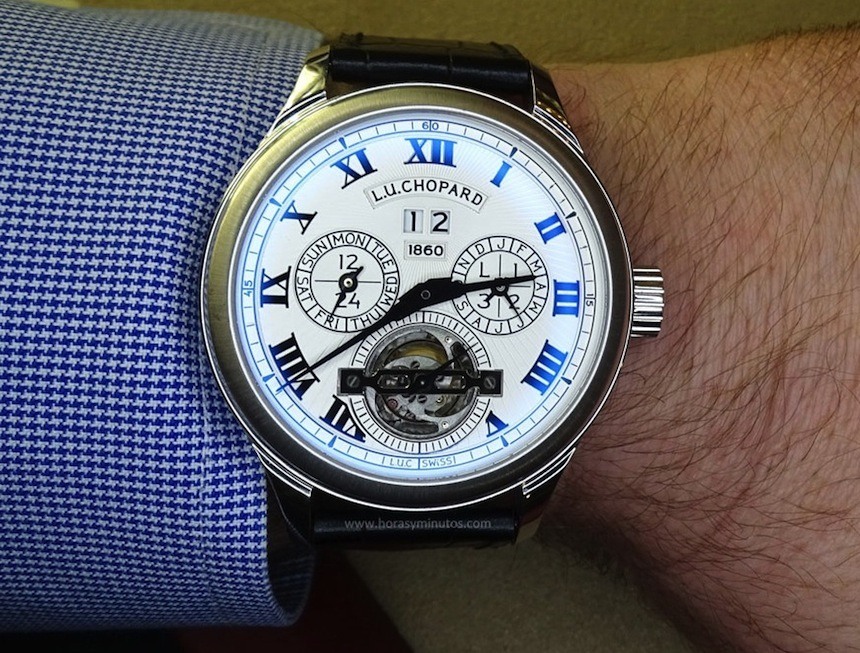 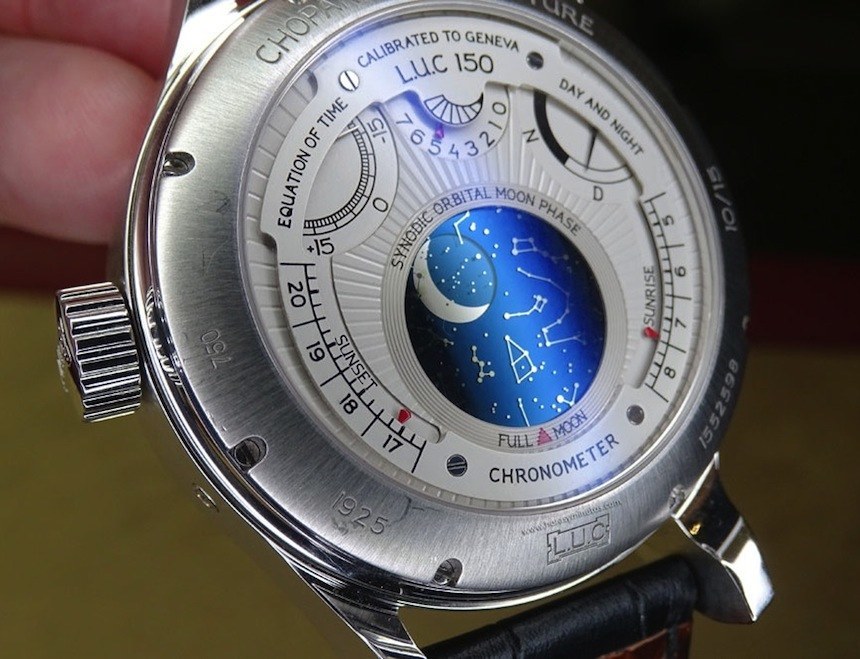 The Scheufele family’s manufacture also brought a good representation of the many things they do. It was great to see the new Chopard Mille Miglia Race Edition (hands-on here), a special edition created for the race with a red dial that makes the power reserve indicator look – at last – really good. Chopard also exhibited all its different models with moon phases, one of them being the Chopard L.U.C 150 All in One, a real tour de force with 14 complications that makes you want to wear the watch upside down. The Chopard L.U.C Regulator – my favorite Chopard watch – was also on show. 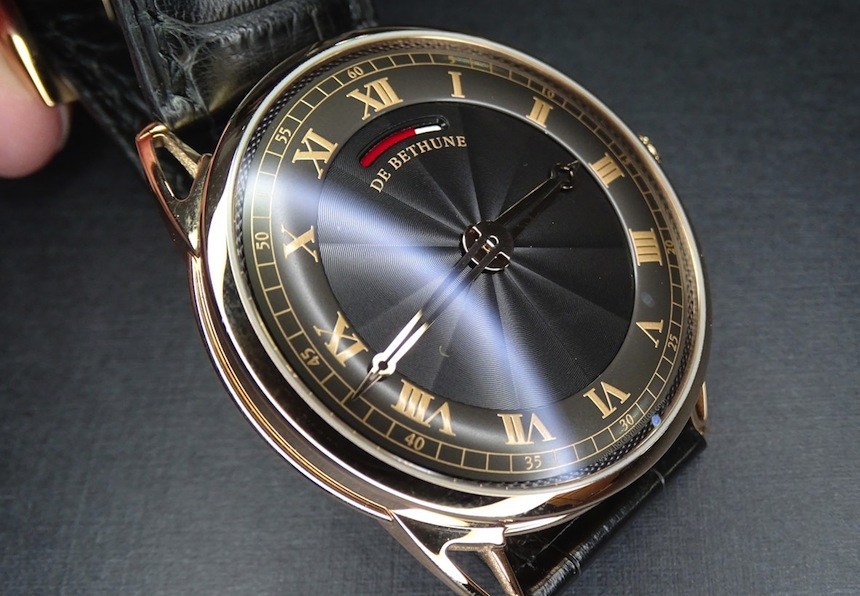 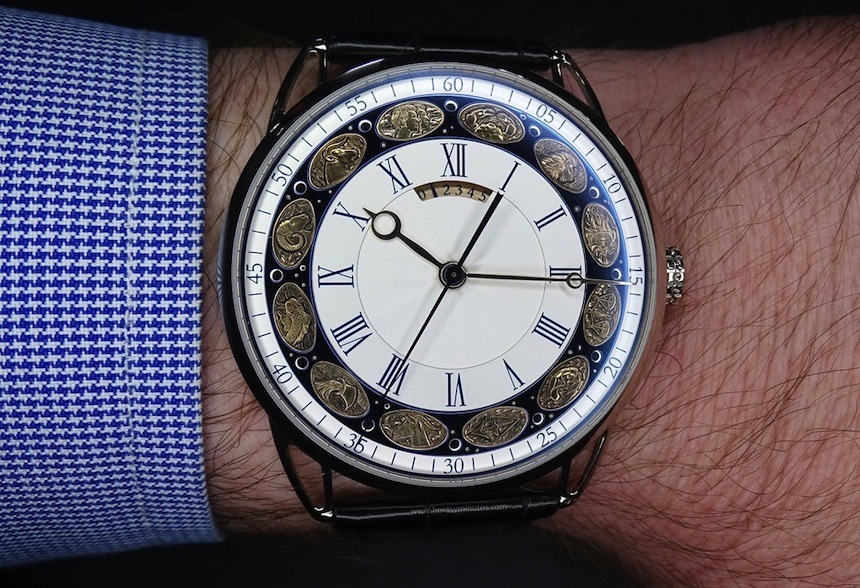 I was really pleased to know that De Bethune was attending the show because I love the brand. Plus, I got to meet David Zanetta’s son, Alessandro, who happens to be their Sales Director. Very nice guy indeed. Anyway, apart from the classics, they had the Quetzacoatl, the De Bethune DB 25 T Zodiac with its dead second caliber, a dramatic De Bethune DB 25 RM in red gold and black dial, and the prize-winning De Bethune DB 29 Maxichrono Tourbillon (hands-on here). 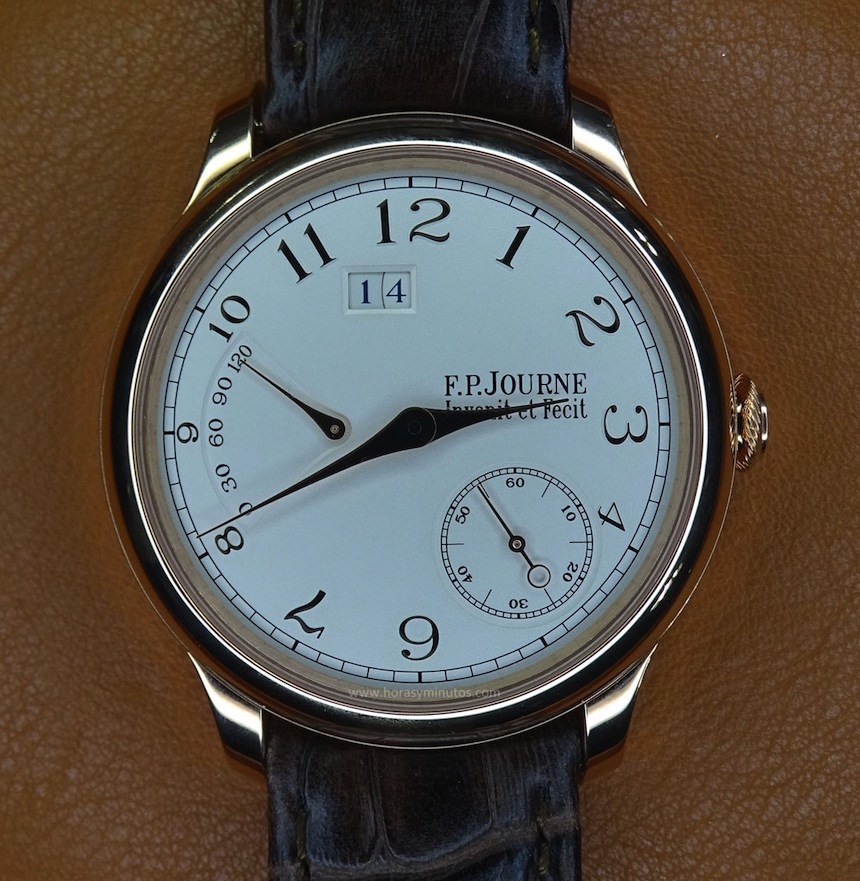 Another treat of the salon. One of the best watchmakers out there, each F.P. Journe piece is an exercise in exquisiteness. Take, for example, the F.P. Journe Octa Automatic Réserve, in which the dial is a block of stamped gold that is then sanded down and applied with a layer of silver – except for the numerals, which appear to be applied when they are in fact part of the solid face.

Bell & Ross has frequently looked to the world of aviation and motorsports for its design inspiration of the watches — for example, a great deal of the dial designs and design elements of Bell And Ross Watches Dubai Replica watches are all predicated on flight tool panels. The recently released Bell & Ross Vintage V1-92 & V2-94 Bellytanker watches are inspired by a racecar from the ’40s. The Bell & Ross Vintage Bellytanker series goes for a more calming and traditional style and color scheme than a more competitive Bell & Ross designs.The name Bellytanker and the associated racecar actually have origins in the realm of aviation. The idea behind these would be to enable the flights to have an extended selection, but once empty, might be dropped mid-flight and help save weight and enhance remaining fuel market. As a section of an aircraft, the Bellytankers were, by necessity, quite aerodynamic and this made their layout applicable for racecars, especially, for the kind of car designed to go really fast in a straight line in a place such as the Bonneville salt flats. As a further tribute to these cars and that age, Bell & Ross also made a concept car — a contemporary interpretation of this Bellytanker. 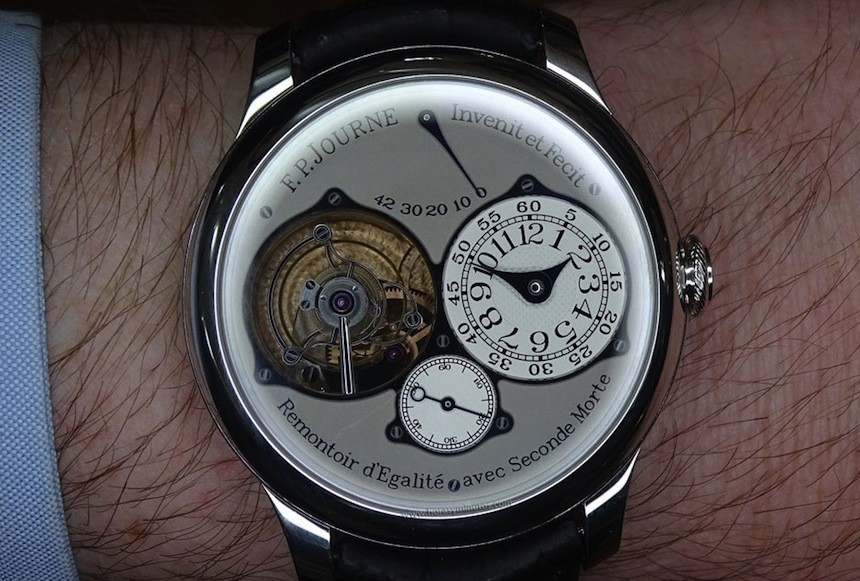 The F.P. Journe Chronomètre à Résonance sports a double balance wheel that synchronizes by proximity and starts beating in opposite directions. As a side effect, you can naturally have double time in the same dial. However, one of everybody’s favorites was the well-known F.P. Journe Chronomètre Bleu with its infinite array of different blue notes. The perfect dress watch. 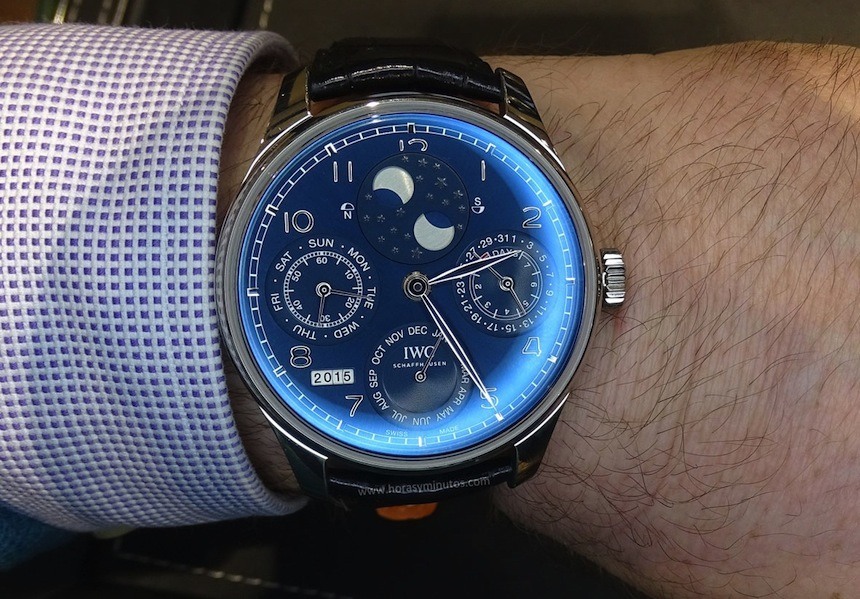 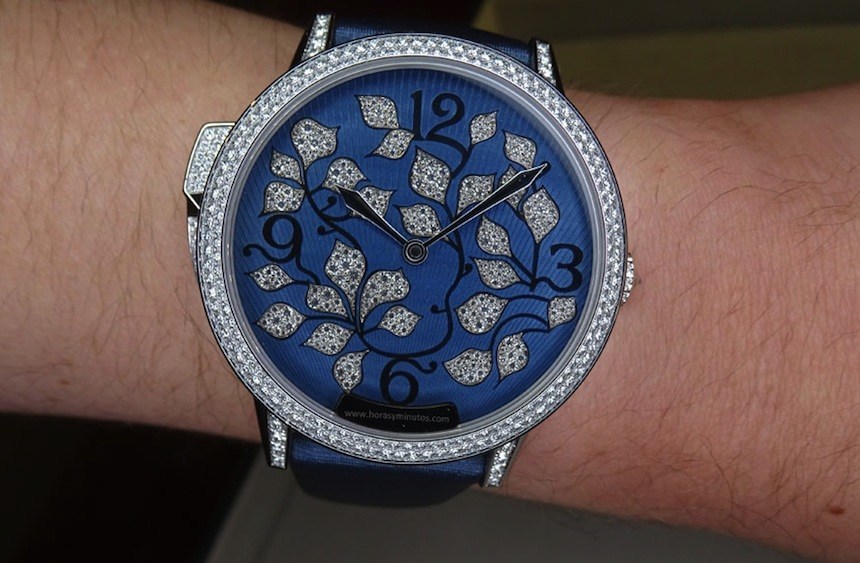 Let’s start first with the ladies’ watches, because JLC has bet on watches for women that are really created for them, and not just watches for men in a smaller size – all with have complications. And that is paying off. For instance, the Jaeger-LeCoultre Rendez-Vous Ivy Minute Repeater, or the Montre Extraordinaire La Rose which – unlike most jewellery watches – has a manual caliber inside. 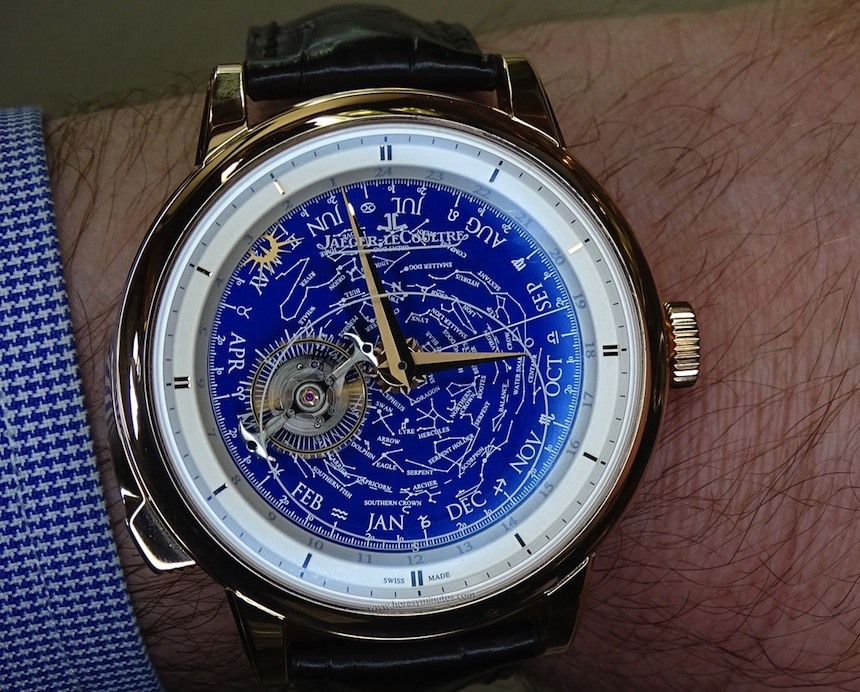 The Jaeger-LeCoultre Master Grande Tradition Grande Complication (hands-on here) was also on display with a flying tourbillon that goes around the Northern Hemisphere signaling sidereal time and the corresponding zodiac sign – plus a minute repeater. And it is beautiful to look at. Not much more you can ask for here. 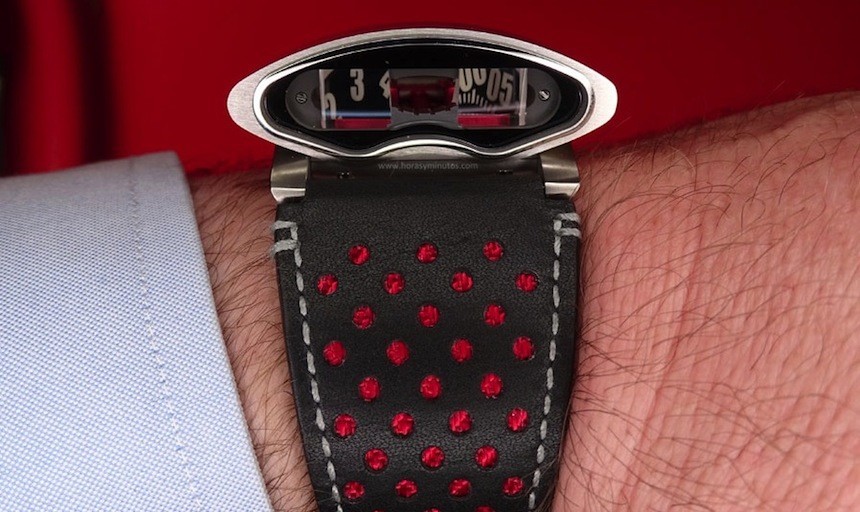 This was the first time MB&F has approached Spain, and it did so with its brand new MB&F HMX (debuted here) which is the anniversary edition derived from the well-known HM5. This version is lighter and cheaper, and has a neat resemblance to the sports cars – and watches – of the 1970s. I especially like the detail of the two oil tanks which actually serve as oil tanks for the caliber. You can even open the cap. 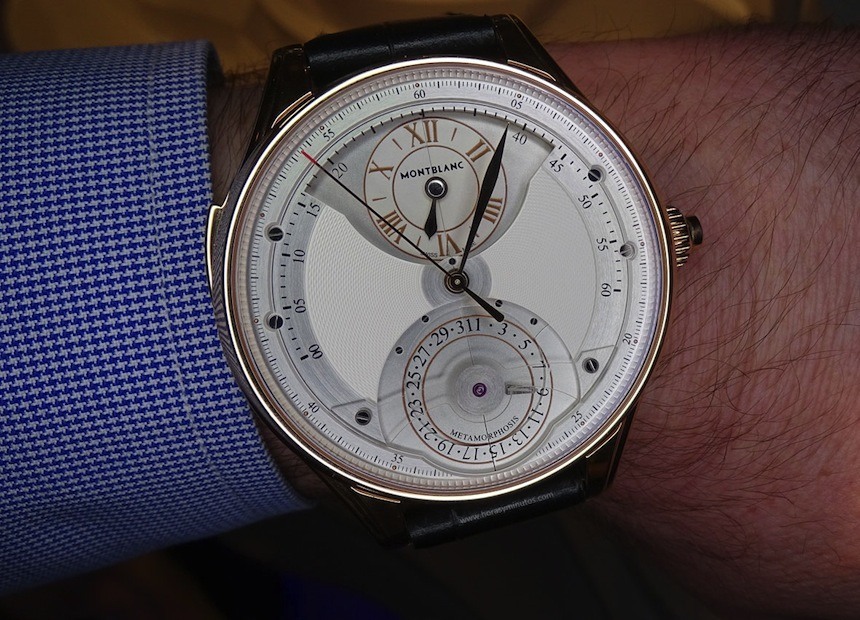 Montblanc is creating quite a buzz in the watch industry and did so at the SIAR Madrid 2015 with a very animated booth and lots of watches. We could see, for instance, the Montblanc Heritage Chronométrie Dual Time (hands-on here), or the always impressive Montblanc Metamorphosis II. 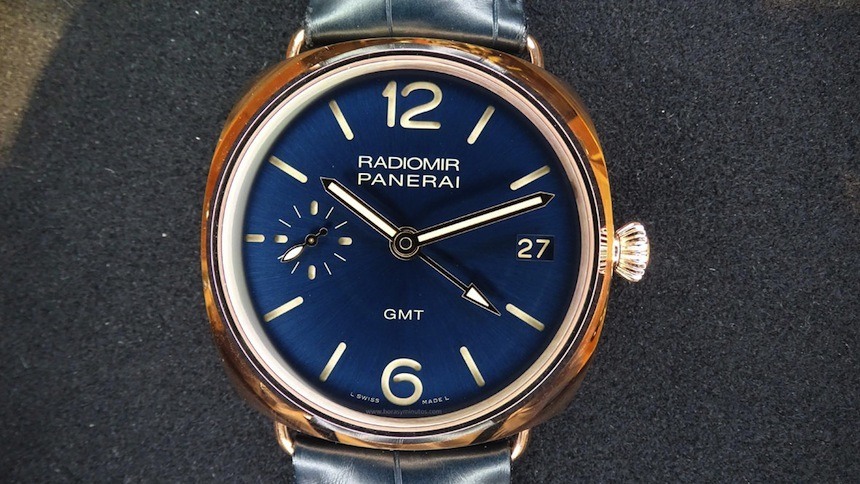 Panerai presented all its novelties, something really appreciated by their fans which in Spain are legions. Everybody wanted to see the Panerai Luminor Submersible 1950 Carbotech 3 Days Automatic with its carbon case (hands-on here). 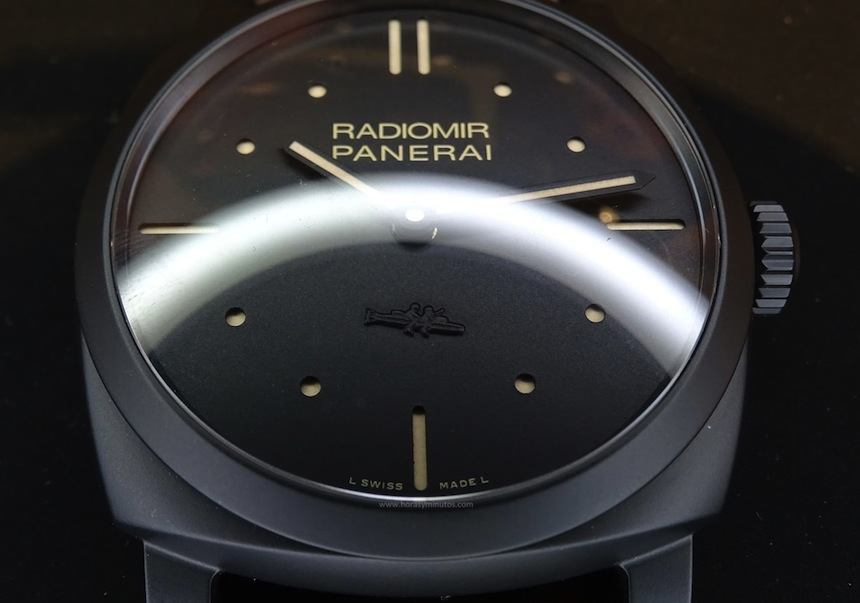 …Or the new Panerai Radiomir 1940 3 Days Ceramica and its iconic SLC on the dial. And, personally, I got to try again my favorite Panerai watch right now, the Panerai Radiomir GMT Red Gold, with its beautiful blue dial. 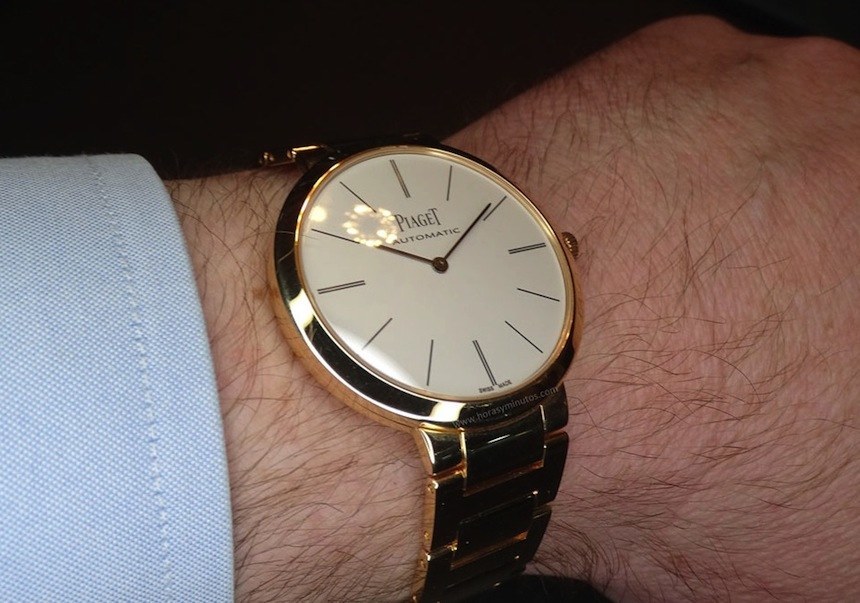 Piaget showcased its Altiplanos, of course, including the Chronograph and the Gold Bracelet. I also heard (and recorded) the chiming Piaget Emperador Coussin Ultra-Thin Minute Repeater (hands-on here), which I happen to like very much – even though reading the time sometimes can consume too much of it. 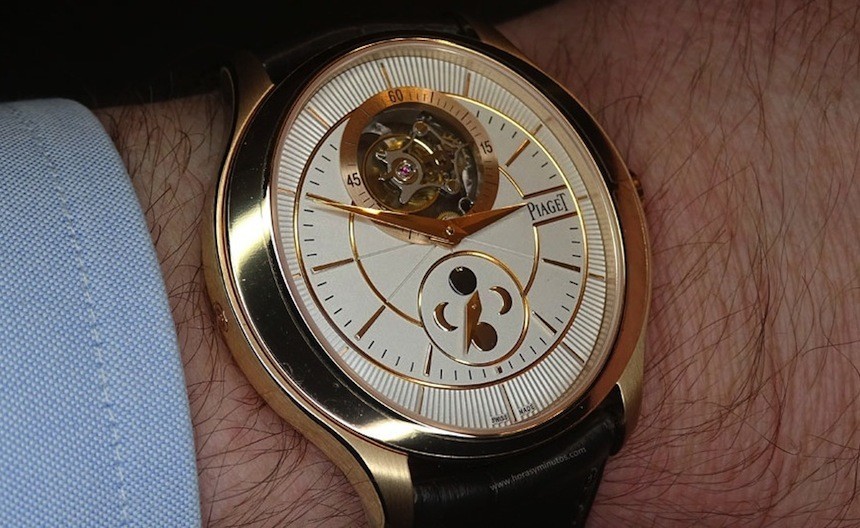 Also on show was the Piaget Gouverneur, which I have always liked as a dress watch because of how it plays with the oval and round shapes on the case and dial. 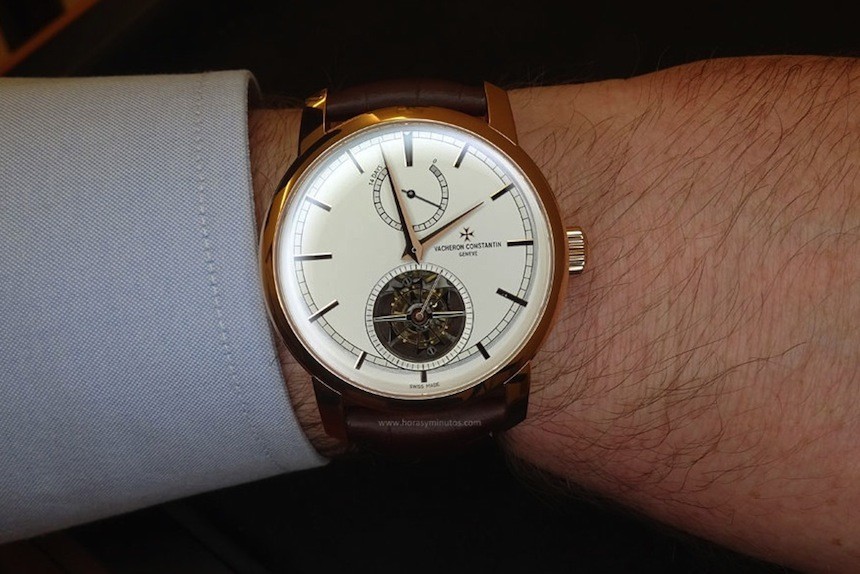 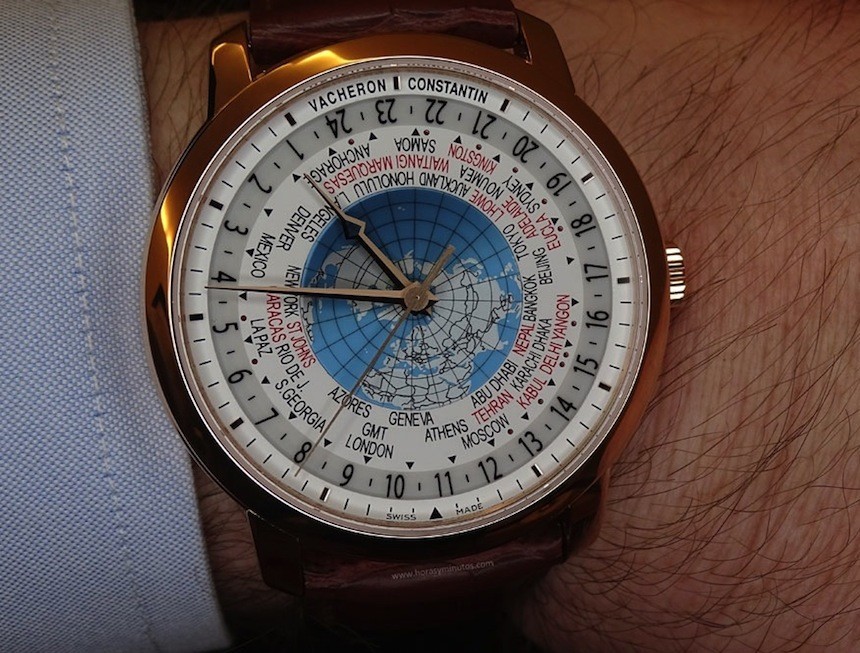 And that’s all for now, folks. If you plan to visit Madrid next year – which you should – don’t miss out on the SIAR. I will keep you informed of the dates and the weather forecast, just in case.

This article has been translated from Spanish to English by its original author Santiago Tejedor for aBlogtoWatch. The original article can be found here on his website Horas y Minutos.