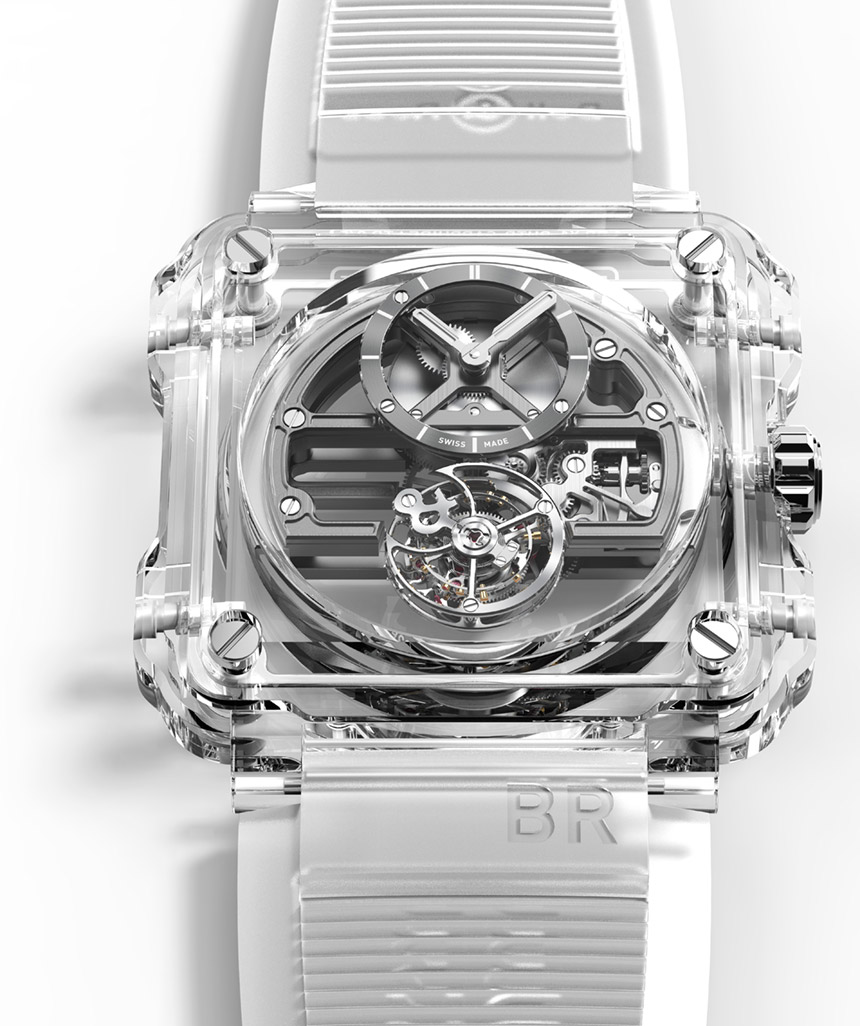 Though probably best known for its more affordable, instrument-inspired pilot and field watches, French watchmaker Bell & Ross continues to assert itself as much more than a one-trick pony, with the latest addition to its BR-X “Experimental” collection: the wild Bell & Ross BR-X1 Skeleton Tourbillon Sapphire. 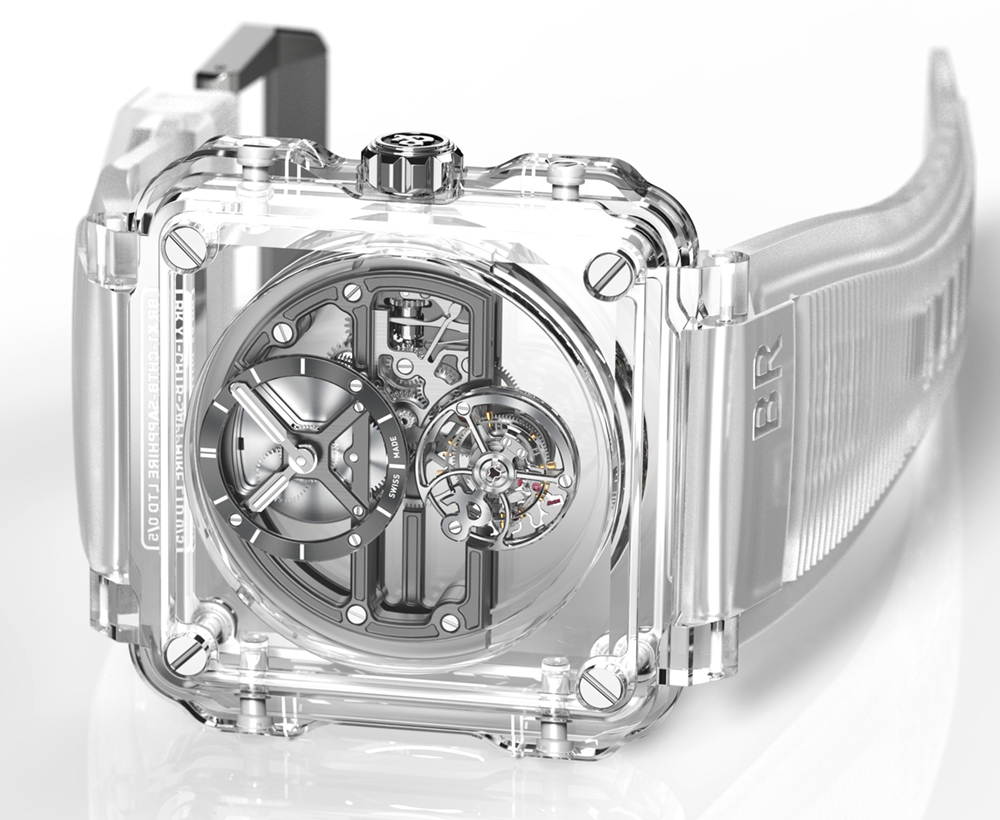 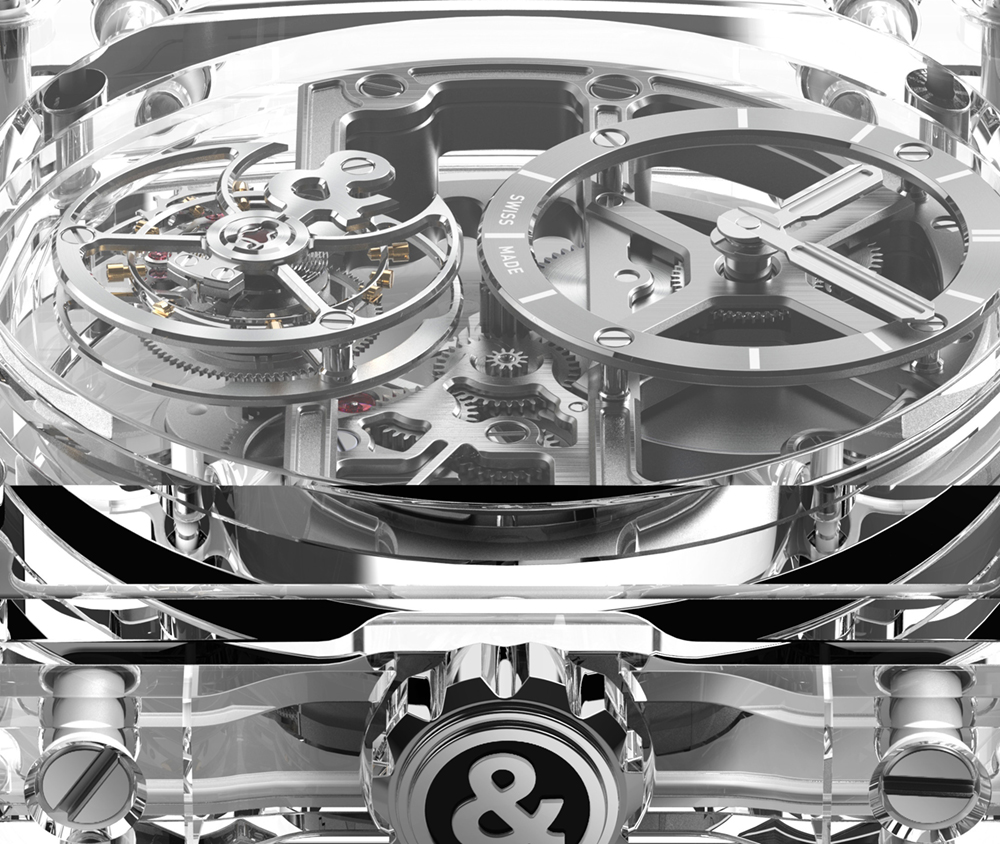 Standouts in this sometimes divisive collection have included the stealthy forged carbon BR-X1 (hands-on) and the more exotic Bell & Ross BR X2 Tourbillon Micro-Rotor Automatic watch (hands-on). With its micro-rotor and ampersand-adorned flying tourbillon, the BR X2 was a step closer to this latest creation not least because it was something of a sapphire sandwich. The new Bell & Ross BR-X1 Skeleton Tourbillon Sapphire is like a functional hybrid of the two – but with a twist, as it uses the BR-X1 case assembled from five, very carefully carved sapphire blocks. 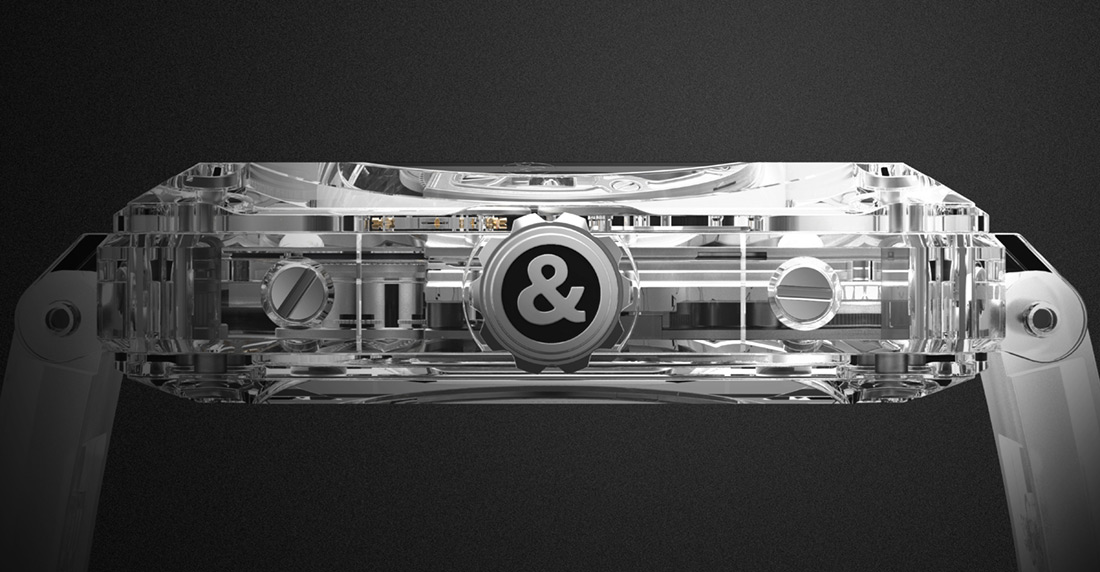 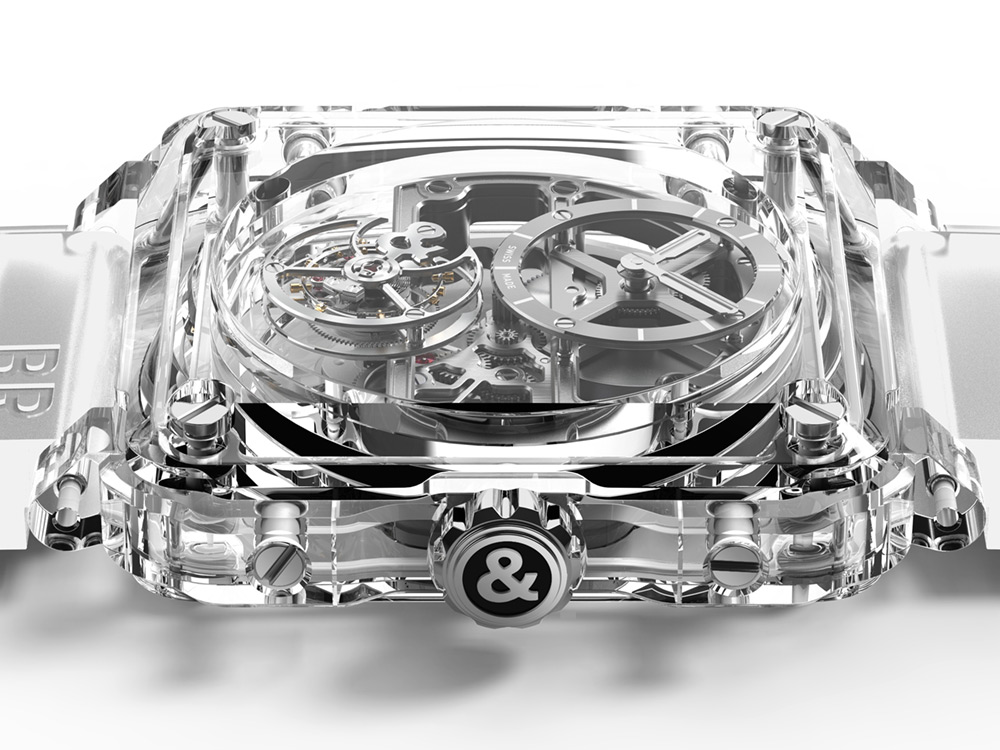 The Bell & Ross BR-X1 Skeleton Tourbillon Sapphire is a whole hell of a long way for a brand whose humble beginnings started with tool watches (remember B&R’s watches used to be manufactured by German tool watch master Sinn), but a journey that’s gotten considerably more impressive as the Experimental line continues to find interesting ways to visually and technologically push the envelope. Sapphire crystal is more or less scratch-proof, but its hardness has made it particularly difficult to work with in anything other than very simple shapes. Technology and techniques have improved in recent years, however, with more fully sapphire-cased watches, and even prices for them beginning to come down such as with the Hublot Big Bang UNICO Sapphire (hands-on) – though they tend to remain more rare and expensive even than precious metal case watches. 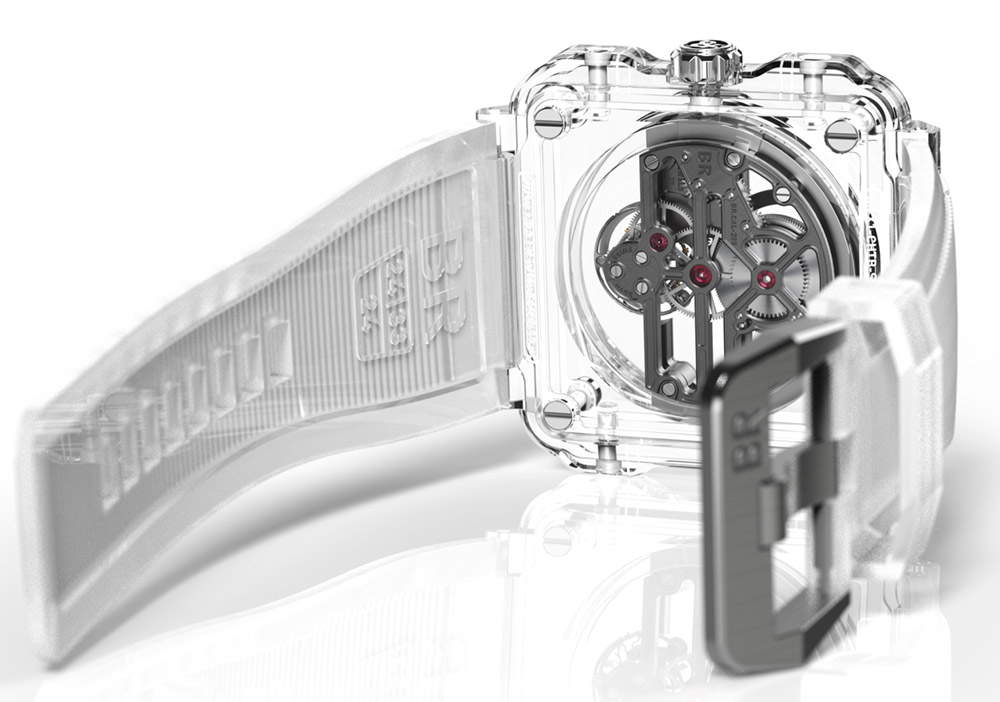 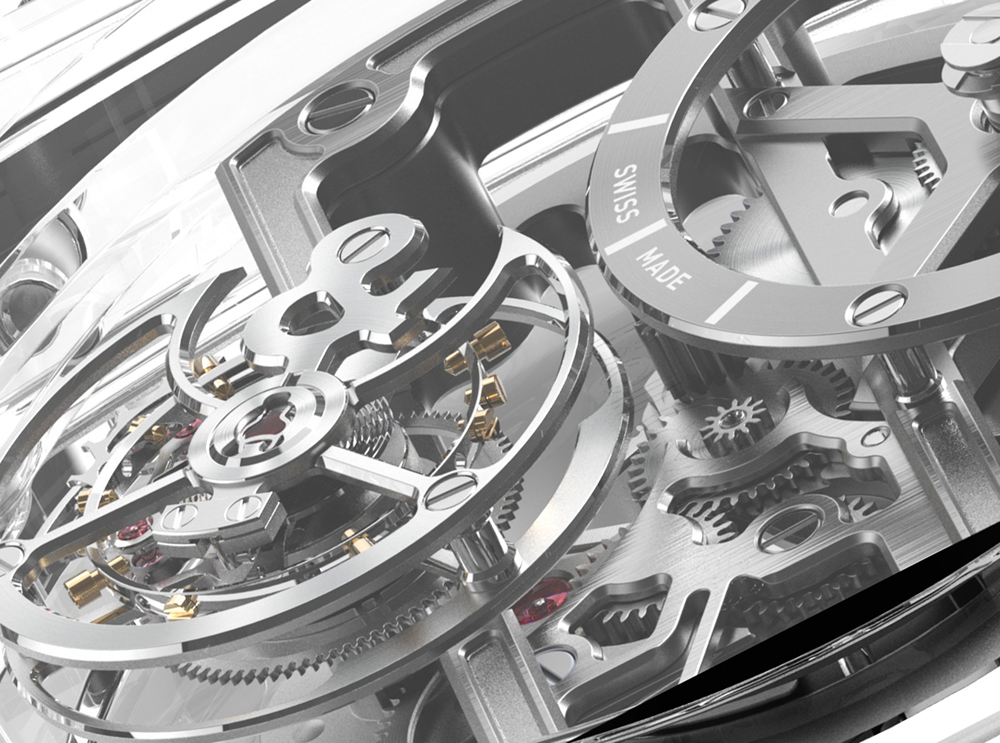 One thing that’s particularly neat about the X1 series watches, though, is that no matter how outlandish each design gets, it still carries Bell & Ross’ core design language; that square 45mm case, screwed together at each of the four corners. And though this DNA does carry through to the Bell & Ross BR-X1 Skeleton Tourbillon Sapphire, were it not for the case signatures, this one could be mistaken for something other than a Bell & Ross watch, as the primary timekeeping cues (the hour and minute hands) have been shrunken to the upper 12:00 region of the dial. While this does give plenty of opportunity to enjoy the flying tourbillon’s movement against all the clear, negative space from the sapphire, it does detract somewhat from overall utility and legibility in comparison with the brand’s pilot and tool watches – something that other Experimental offerings have maintained. 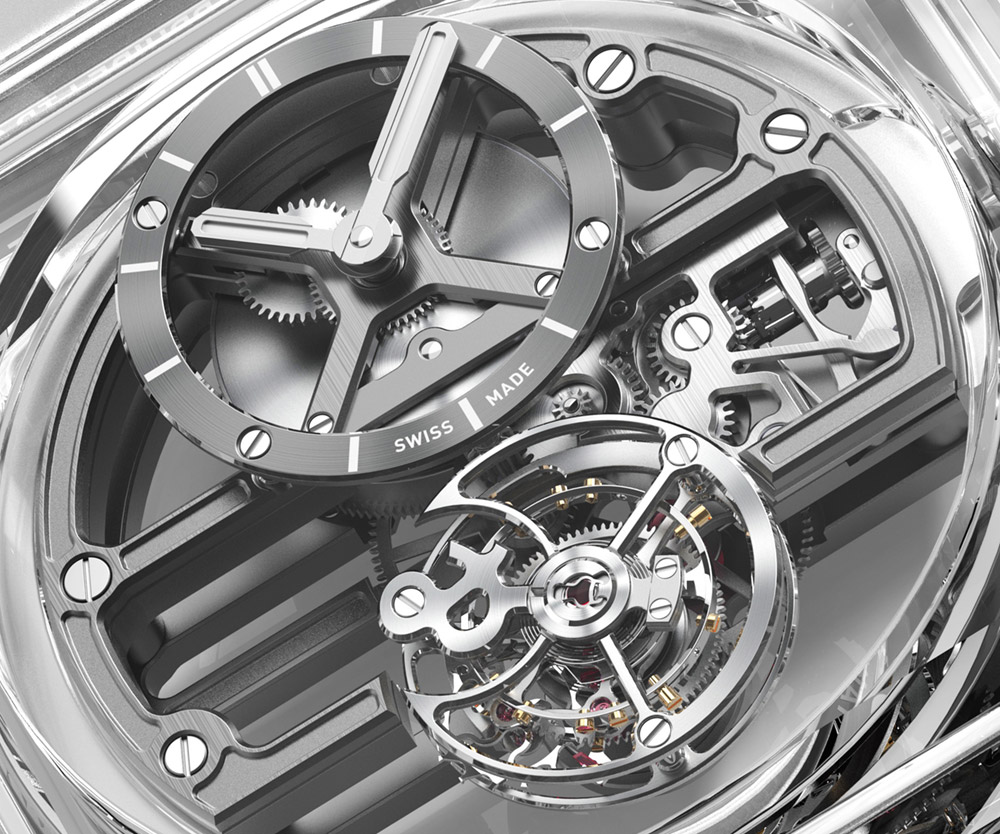 The Classic V1-92 Bellytanker is powered by the Bell & Ross caliber BR-CAL.302, which is essentially a Sellita SW300-1 (or ETA 2892-2). Having a 42-hour power reserve and beating at 4Hz, this is competent, reliable modern movement found in more watches than I will list out here. The steel caseback has an engraving of this Bellytanker concept car along with the usual complement of text and information.The Bell & Ross Vintage V2-94 Bellytanker chronograph is powered by the caliber BR-CAL.301, which is an ETA 2894-2. I discussed this motion in the Tissot Heritage 1948 Hands-On article here, but it is a modular movement based on the ETA 2892-2. Bell & Ross has slightly modified it to eliminate the third sub-dial but mechanically it delivers the exact same 42-hour power reserve and stays equally as reliable. The sapphire crystal of the display caseback is printed with a shape of the Bellytanker concept car. Regrettably, Bell & Ross has not shared caseback images of these watches, but you probably get the idea.The Bell & Ross Vintage V1-92 & V2-94 Bellytanker watches will likely be produced in a limited run of 500 watches every single. They are sized and made conservatively enough to be everyday wearers too. The Bell & Ross Vintage V1-92 Bellytanker ships on an aged brown leather strap for $2,300 and the Bell & Ross Vintage V2-94 Bellytanker is available for $4,400 on a brown calfskin strap or for $4,700 using a stainless steel bracelet. 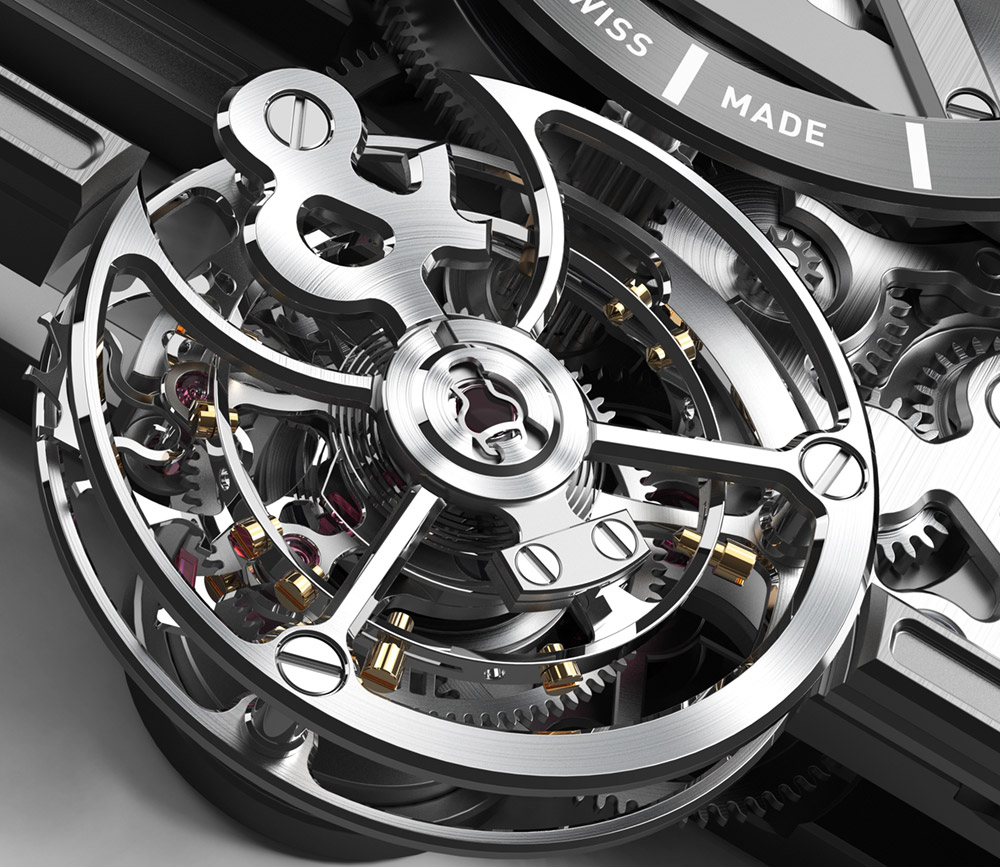 The steely gray lines of the 3Hz manually-wound BR-CAL.288 movement architecture cast a nicely skeletonized, industrial contrast against all the translucent elements on the watch – even the strap is translucent rubber, which should make for some interesting wrist shots. Part of the idea, besides the novelty itself of a totally transparent case, is that the movement and even the screws holding the case together are visible from about every angle. The only part of the watch that isn’t fully see-through is the large mainspring barrel itself, which provides 100 hours of power reserve, and is tucked conveniently behind the luminous hour and minute hands at 12:00, preserving some degree of legibility for timekeeping. 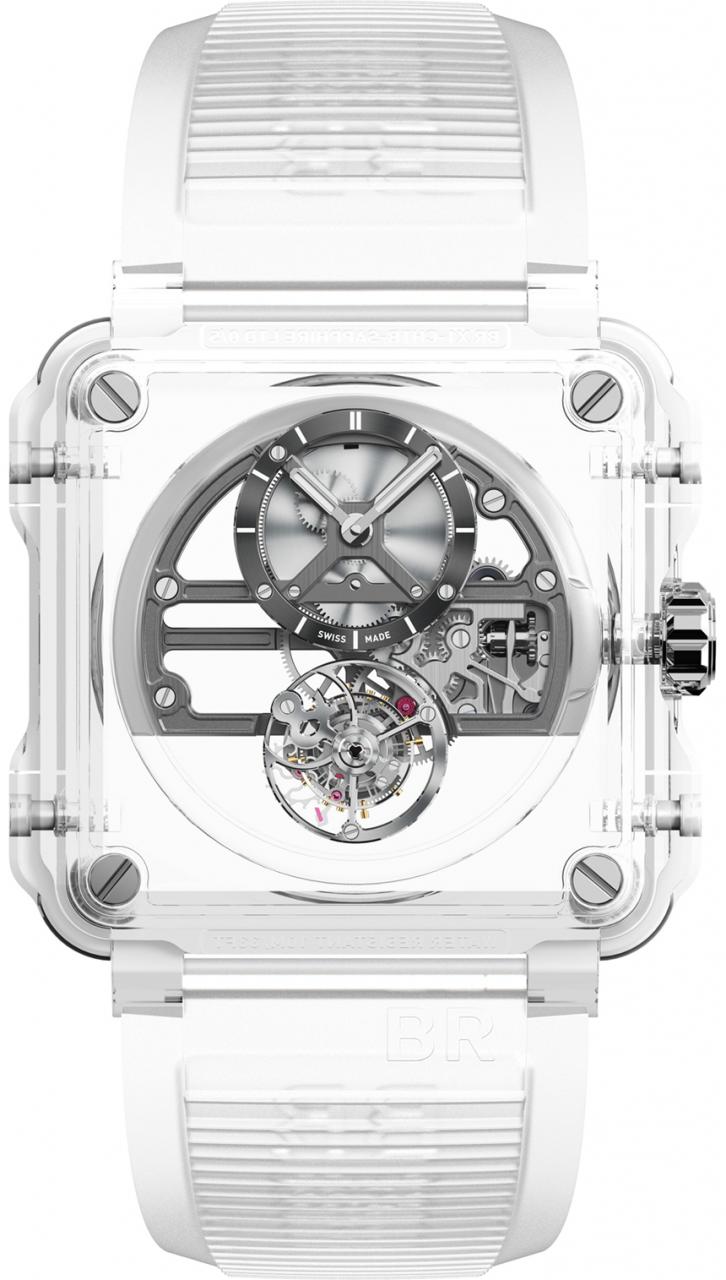 In keeping with the more exclusive traditions of the Experimental collection, only eight pieces of the Bell & Ross BR-X1 Skeleton Tourbillon Sapphire have been produced. However, this particular piece is now the most expensive of all the X1 offerings – even beating out the BR-X1 Chronograph Tourbillon Rose Gold Diamond variant by a healthy margin – with an asking price for the Bell & Ross BR-X1 Skeleton Tourbillon Sapphire of $385,000. bellross.com